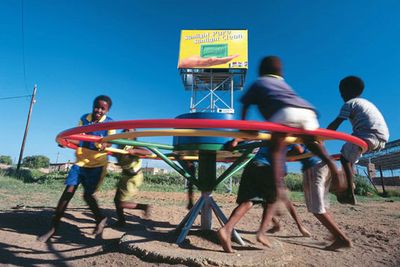 A long time ago, back in 2007, people were complaining about ego-driven architecture. The real estate market crash were supposed to chastened architects and force them to turn to socially-conscious design, to be selfless when they had previously been egocentric. To a certain extent, that’s what has happened. Many architects and designers now devote part or all of their time to non-profit and NGO work. More than a few had little choice.

Julie Lasky reports on how well they’ve been doing. Overall grade: C+. In some cases, the social problems were so huge and intractable that no one solution is ever going to make much of a difference. In other cases, designers were working in spaces with which they were unfamiliar. Earnest, well-intentioned designers have flooded the marketplace of good ideas, leaving weary NGO administrators to manage the fierce competition for funds.

One example of a well-intentioned design initiative gone awry is the PlayPump, a water pump designed for use in sub-Saharan Africa (above). The program was widely publicized as an instance of American design ingenuity. The pumps were widely distributed before they were adequately tested in their conditions of use. Kids loved them, but village women found the pumps hard to operate, and when they broke down, which was frequently, no one was available to service them.

The key to success in socially-conscious design, Lasky suggests, is less an ingenious or elegant design than a good NGO partner. Un Techo Para Mi País, a Chilean charitable organization, made Designmatters’ Safe Agua program effective in distributing clean water to the slums of Santiago.

Architects and designers have been producing socially-conscious design long before the real estate market crash. John Peterson of Public Architecture, for instance, has been trying to http://onewaystreet.typepad.com/one_way_street/2008/02/the-architectur.htmlconvince architects to engage in small-scale, modest social design projects that may not be featured on CNN and National Geographic, like the PlayPump, but nevertheless improve people’s lives in subtle ways. Instead of rescuing all of sub-Saharan Africa, Public Architecture wants to provide shelters in American cities for day workers waiting to be hired. The keys to Peterson’s success are that his firm designs for conditions with which they are familiar, and the firm understands the logistical challenges of effecting even modest improvement projects.