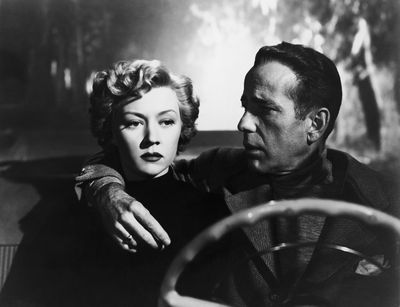 Last night I was exhausted after a long day at work and a 6.5-mile bike commute straight into the gale-force winds of the Midwestern weather bomb. I felt like I’d just pedaled up a flight of stairs. After everyone else went to bed I collapsed into an easy chair to watch Nicholas Ray’s In a Lonely Place, which had arrived that day from Netflix.

I couldn’t remember why I’d placed the film in my queue, years after the last Ray film I’d seen, which was either Rebel Without a Cause or Johnny Guitar. Neither film impressed me very much at the time, and Ray has never been very high on my list of great Hollywood directors. But he’s on a lot of people’s list of great directors, and he was recently the subject of a Film Forum retrospective. So, battling fatigue, I pressed play.

I was transfixed from the opening scene. Humphry Bogart is at his sour best and Gloria Grahame (Ray’s wife at the time, and later his daughter-in-law) appears to be a better onscreen match for Bogart than Lauren Bacall. The film’s atmosphere is gripping: the action is set in Hollywood circa 1950, just as the paranoia was settling in. (Art Smith, who plays Bogart’s character’s agent, was later blacklisted after being fingered by Elia Kazan.) By the first police station scene in which Bogart nonchalantly implicates himself in a murder, and Grahame–looking at once feline and mousy, sultry and prim–provides his alibi, I understood why Ray had been such a hero to the French New Wave directors. Why hadn’t I seen that before?

Sometimes I miss things. Sometimes the circumstances aren’t right. Sometimes I’m not ready. I couldn’t see past James Dean in Rebel Without a Cause, and there was some kind of noise that prevented me from processing Johnny Guitar.

Sometime you have to see a film at the right time. The tension that pervades In a Lonely Place strikes me as analogous to the paranoia and tension of the current moment. For the past few weeks we’ve been receiving four or five phone calls a day about candidates in local elections. The messages are invariably negative and the calls from people posing as local residents, but they’re from East Coast numbers. Somebody, someplace, has taken an interest in a race for a state representative seat. Where is all the money coming from? Who is behind all this? Why do they care about such a low-level office? What allegations are true, and which are false? All of these questions appear as Cold War-style paranoia and conspiracy theory mongering is entering the mainstream of American politics. Similarly, you have to arm yourself with doubt and suspicion to watch Dix Steele, Bogart’s character. You want to believe him, and you want to believe the images Ray has shown you, but you can’t.

The most troubling aspect of watching In a Lonely Place, alone late at night, was that I was enjoying myself. Ray had put me in the same place as a horror film: experiencing the peculiar pleasures of dread. I willingly allowed myself to be led to a place I didn’t want to go. I liked watching my own desire to see good in someone else systematically dismantled. As Dix starts to unravel, to become more of the person he was at the beginning of the film, I began to ask, Who am I?