Welcome to day two of my blogging about election day under the capacious theme of nausea and rationalization. My thesis is that this election is about the search for terms to describe an existential feeling of dread when confronted with the blankness of the future.

9:37 AM: Sometimes I think it’s interesting–and true to Walter Benjamin’s critical methodology–to look at how stories are arranged on news portals. It doesn’t make a difference if the stories are chosen by an editor or by an algorithm. The arrangement is never random, yet it can be suggestive. For example, take the ABC News home page this morning. The results board is ready for data, but it will be hours before any information can be posted. There’s a clock counting down like a doomsday machine, which is a double-sided symbol: of a cataclysm to be feared (liberals fearful of an intensification of hard times) or welcomed (conservatives hopeful for end times). In the meantime, there are other anxieties to check on: airline outrages, terrorists, and obese fruit flies. The fruit flies story has a link to yet another phony trend: Obama driving blacks to the G.O.P.

11:13 AM:The rationalizations have already started. Actually, the started last night, when the candidates were in their sleepwalking stages. Before any results are in the rationalization of the electoral results has started. The New York Times jumped in at 8:20 EDT last night with a page full of predictions and a story, “5 Reasons Democrats Could Beat the Polls and Hold the House.” It imagines a point in time tonight when John A. Boehner kicks a trash can. Why is he so upset? Cellphones. You see, pollsters only call landlines, and more Democratic voters use cellphones than Republican voters, so the pre-election polls are skewed. In this fantasy version of the election, voters hang up their cellphones and vote in droves for Democrats, except in Alaska, where they split the votes for all three candidates, leading to nasty legal action. The results in Alaska reflect the madness that is the 49th state. Every man, woman, child and sled dog got a check from the state’s rent-a-wilderness program for oil companies, the state budget is balanced, and the state economy is better than average for the nation, so naturally everyone is furious.

1:10 PM: I’m going to vote in a few minutes. My son has the day off from kindergarten (I’m trying to piece together the sinister Republican conspiracy that brought this about), so I’m going to bring him to the polling station to show him the pageantry of democracy. I’ll leave you with some interesting time-fillers: all you really need to see on TV tonight will appear at the top of the hour, unless you want to see David Brooks gloat in his measured, reasonable way; Tea Party people are incoherent and strange when it comes to capitalization, too; Susan Orlean on voting where liberal Democrats “are so rare that children can bring one in for show-and-tell at school”; the Chicago Tribune dusts off its Bush-era rhetoric by implying that terrorists will keep sending PETN-laced toner cartridges unless Chicagoans vote Republican. 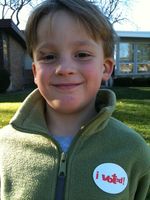 2:36 PM: I just got back from voting. It all felt very small town and stable, not revolutionary at all. The poll workers handed out candy, just like in Susan Orlean’s precinct. My son’s school librarian was in line ahead of us. My son accompanied me to the voting booth, and I pointed out the names on the ballots: here is Alexi Giannoulias, the man I’m voting for to replace Barack Obama as U.S. Senator; here’s Daniel Biss, the candidate who’s sign appears in our front lawn and who once talked with us in our living room; here’s Jan Schakowsky, the woman who shook our hands at the 4th of July parade; here’s Forrest Claypool, who my cousin used to work for. We both got “I voted” stickers, which entitled us to a $2 hamburger at a local restaurant.