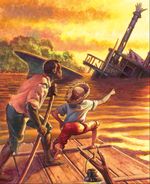 All week I’ve been blogging about elections as a socially symbolic act. Election discourse reflects unease only indirectly, and seeks resolution in a symbolic way. In other words, elections are like novels: they give form to conflict, channel desire in a meaningful direction, and arrange all the parts into a satisfying whole.

Consider Huckleberry Finn, the first distinctly American novel. The novel begins with an escape from paternal authority, followed by a journey through a landscape of irresolution (both hostile wilderness and space of limitless opportunity, both corrupting and purifying), then concluding with the discovery of a new realm of possibility–made possible by the death of a father. In Twain’s novel the journey is strictly forward. There’s no looking back. “I’ve already been there,” Huck sneers when someone suggests he backtracks. Huck knows his story is complete, and he’s ready to end it. However, not even the most tightly constructed narrative resolves every issue. Even by the terms of the day Jim’s situation is incompletely resolved. We overlook these small irresolutions because the power of narrative lies in the act of drawing disparate parts into a larger whole. It’s not uncommon for novels and movies to have false endings, as an apparent resolution unravels so that the plot can return to an open conflict.

The election of 2008 was supposed to follow this narrative form. Not only did the U.S. elect a different type of person to the presidency, but George W. Bush’s story had reached a definitive, if unhappy, end. The Obama triumph offered resolution of some ancient American conflicts, but in the main it was also open-ended. Obama had campaigned on the audacity of hope, and American politics were supposed to be at once familiar and different–the same as before, but better.

The meaning of the plot twist of the election of 2010 remains to be seen. On one level, it’s an element in the genre. Most every ruling party loses seats in midterm elections. On another level, 2010 is a retelling of 1994, or more pessimistically, 1936. Repetition in narrative is generally positive. Most stories, after all, are retellings of other stories. Sometimes repetition can take the form of an obsessive return to a trauma. The next time something troubling and unexpected happens to someone you know, see if they have a compulsion to tell and retell the story. The story will be different each time, but something will be missing each time.

What’s troubling about the 2010 election is the breaktaking speed at which the political cycle has repeated itself. If there’s a consensus about the results of the election, it’s that the dissatisfaction that propelled an obscure senator from Illinois to the presidency is still very much unresolved. Even Repuplicans recognize that 2010 is a backtracking, not a change in direction. “We’re on a pretty short leash here,” says Rep. Jeff Flake, an Arizona Republican. “We’ve told people we’d not only be better than the Democrats, but better than we were.” It’s as if all the truths about paternity and freedom remain secret at the end of Huck’s story, and he returns to Missouri, uncertain about when his abusive father will return. It’s as if Huck has to relive the same story over again–without knowing how many times he has to repeat it.

Yesterday after voting I found myself out of things to say about the 2010 election. The experience of taking my son to the polling station was reassuringly familiar and seemed to bring closure to an ugly political season. I felt like I was introducing my son into one of the best things Americans ever did as a people: turning over ultimate authority to ordinary people. He’s only six years old, so I don’t know how much of the process he really understood. This morning he wanted to know who got “Barack Obama’s job.” I informed him that he was still president. I don’t know if he found this reassuring, but I did. It’s possible Obama could be an even greater president, just as Clinton turned out to be after 1994. American stories generally end happily. But we could also be obsessively returning to a moment of trauma, when something broke. In an incoherent, agitated way, we’re fumbling to tell a story we’ve never told before, and we don’t know when, or how, it will end.