With the Republican victories in the midterm elections, there’s probably a lot of celebrating going on in McMansions across America. Here are some things to do for the rest of us. 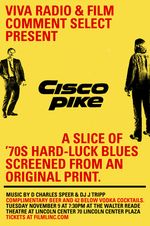 Ah, the early 1970s, that quaint time when economic downturns were only recessions, just downturns in the business cycle, and not structural breakdowns in the American economy like we’re facing now. Revisit that time at the Film Comment/Viva Radio presentation of Cisco Pike (Bill Norton, 1972). The film stars Kris Kristofferson as a burned out rock musician adrift in decaying Venice Beach. Karen Black plays his wary ex-girlfriend, Harry Dean Stanton and Wavy Gravy (yes, the guy they named the ice cream after) play his derelict friends. Gene Hackman plays the who strong-arms him into dealing drugs. Warhol Factory starlet Viva drifts in and out of the movie. The screening takes place Tuesday, November 9 at 7:30pm at the Walter Reade Theater on New York’s Upper West Side. The screening will be followed a performance by D. Charles Speer and the Helix, a country rock band, with an afterparty in the Furman Gallery with music by J Tripp of Strange Baby. Details here.

Personal redemption and distressed urban space of another kind can be found in the work of graffiti artist JR, who just won an award from TED. JR’s technique is to paste giant photographs of residents of struggling neighborhoods on nearby buildings. The TED prize committee explains, “JR creates pervasive art that spreads uninvited on buildings of Parisian slums, on walls in the Middle East, on broken bridges in Africa or in favelas in Brazil. People in the exhibit communities, those who often live with the bare minimum, discover something absolutely unnecessary but utterly wonderful. And they don’t just see it, they make it. Elderly women become models for a day; kids turn into artists for a week. In this art scene, there is no stage to separate the actors from the spectators.” Among his projects are earlier “Portrait of a Generation,” portraits of tough guys in suburban Paris; “Face 2 Face,” the same basic idea only with Israelis and Palestinians; and “Women Are Heroes,” a project focusing on the ”dignity of women who are the target of conflict.” A trailer appears below.

TRAILER ” WOMEN ARE HEROES” from SOCIAL ANIMALS on Vimeo.

And about those McMansions: The Congress for the New Urbanism (CNU) announces an American Planning Association Workshop Retrofitting Suburbia into Sustaining Places. The workshop will be run by Ellen Dunham-Jones (a CNU board member) and June Williamson, co-authors of Retrofitting Suburbia: Urban Design Solutions for Redesigning Suburbs

. The authors will share their ideas about how to retrofit suburban property types into more sustainable places. The workshop takes place on November 12-13 in Chicago, Illinois. More information can be found here.