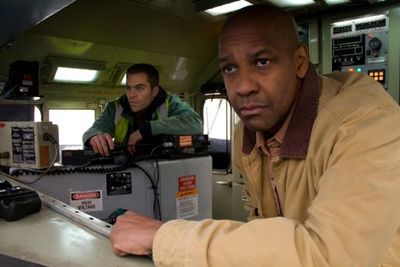 Vadim Rizov has a nice analysis of Tony Scott, the director of Unstoppable, or Denzel Must Stop That Train. According to Rizov, Scott works against the conservative tendencies of the action genre by lingering on the details of working class life.

Unstoppable is a totally decent action movie in which blue-collar grunts do the right thing, even against the threat of firing: it’s a movie for workers in an ugly mood. It’s worth noting that the first 20 action-less minutes groove on impenetrable trainyard jargon that’s unexplained and a nice sense of a day slowly beginning. [. . .] So any social discontent Unstoppable picks up on is pretty much the product of those first 20 minutes, which have something like atmospheric verisimilitude.

After the first 20 minutes, the film gets on track, so to speak, as a conventional action film in the manner of Michael Bay, only better. Upper and middle class characters are cartoonish and ineffectual and completely cut off from the real, while working class characters work with grim resolve to keep the machinery of capitalism humming along.