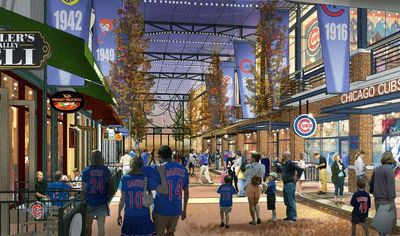 The latest instance of the public versus private funding for sports facilities involves 96-year-old Wrigley Field. The Ricketts family, owners of the Cubs, want the state to contribute up to $300 million to renovate the stadium, the second oldest in the majors. The Ricketts claim that subsidizing the stadium wouldn’t cost taxpayers anything because Wrigley would generate enough tax revenue to cover the bonds. Mayor Daley and Governor Quinn both laughed. The state is billions in debt and the city has a record deficit.

The Ricketts have hinted that unless they get taxpayer money to renovate Wrigley, they may move the Cubs could out of the city. Steve Chapman says fine, go. Wrigley has outlived its usefulness.

To even think of replacing the nostalgia-drenched ballpark is heresy to diehard Cubs fans. But Yankee Stadium was even richer in history and tradition — winning tradition, by the way — when the Yankees abandoned it in 2008.

This year, the Dallas Cowboys managed to suppress sentiment long enough to demolish Texas Stadium, probably the most recognizable facility in the National Football League and just 39 years old. Ricketts envisions playing in Wrigley for another 50 years. In what universe does that make sense?

The proposed design is by D’AIQ Architects, the same firm that worked on the renovation of Fenway Park. If the current design is built, Wrigley Field would be converted from an authentically old ballpark into a copy of an old ballpark. Wrigley would become yet another stadium trying to look like Wrigley Field.

This could be the beginning of the end for publicly-financed stadiums in the U.S.