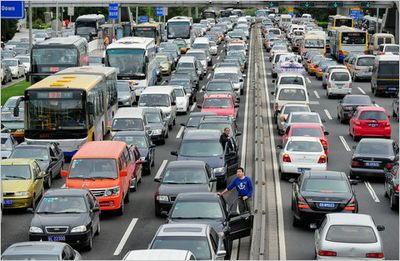 The Chinese are everywhere in Africa, and they’re making a lot of people nervous. They’ve been called a “rogue donor“ for aid that is “nondemocratic in origin and nontransparent in practice, and its effect is typically to stifle real progress while hurting ordinary citizens.” They’ve been accused of abetting genocide, propping up corrupt governments, and ruining the environment across Africa.

During a trip to Nairobi an irritated Elisabeth Rosenthal started to wonder why the Chinese are making car traffic congestion worse in Africa when they’ve already learned their lesson back home.

This week I was in Kenya and ended up spending a lot of time sitting in traffic. Even at night, a trip to the Nairobi airport that should have taken 30 minutes took three times that. [. . . ] In booming Nairobi, I witnessed a common tactic for addressing the traffic problem: road widening and road construction. It seemed like nearly every major road was being enlarged when I was there. As in much of Africa, Chinese contractors are a mainstay of such road-building projects.

Beijing has built six ring roads to relieve congestion and is contemplating a seventh. Yet traffic remains at a standstill.

Meanwhile, in the U.S., the stimulus package allocated $27.5 billion for highway projects, but only alightly more than $8 billion for other types of transit systems, excluding high-speed rail. “Building roads may have been a great way out of the Great Depression of the 1930s,” Rosenthal writes, “but is it the best strategy now?”

It would depend, I suppose, on whether the highway construction was defined as fixing the nation’s crumbling infrastructure, as many liberals and conservatives have requested, or contributing to suburban sprawl. Who decides which project is which?

There’s nothing green about traffic gridlock, but a company in Chicago wants people to believe there’s such a thing as a green parking garage. As Blair Kamin puts it, “‘At least I’m parking my energy-sucking SUV in a building that’s saving Mother Earth,’ customers can assure themselves.”