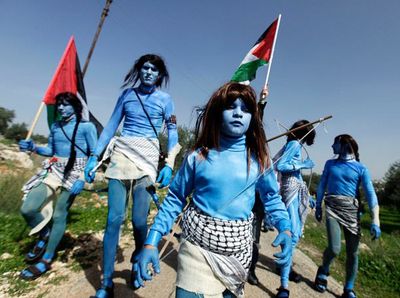 Over at TripleCanopy Nadja Millner-Larsen, Wazhmah Osman and Danyel Ferrari gather to discuss the odd phenomenon of Palestinian protesters dressing up as Na’vi from the film Avatar. The authors see the protesters’ choice of imagery–only a few years ago they leaned toward American Indian costumes–as an illustration of the problem of representing a political struggle at a time when neither shame nor shock works anymore.

The problem isn’t that people have become inured to images of suffering. Rather, images of suffering create a binary that limits how a political struggle can be understood. Millner-Larsen invokes Alain Badiou’s critique of humanitarianism to explain the problem:

He argues that post-1968 human rights discourse splits people into two groups: those who have rights and those who do not. Because of this, the only way humanitarians can recognize the dispossesed is as victims; political action is reduced to the bare minimum of protecting people from harm. For Badiou, this has transformed the way the West perceives the third world: not as militants with whom one might have a political relationship, as in the 1960s, but as victims with whom one can only have an ethical relationship based on mere pity.

(For more on Badiou’s ethics and his view of the problem of evil, see here and here.)

In effect, by evoking the Na’vi the Palestinians are trying to transcend the binary by identifying themselves as militant sufferers with mystical claims to a land. Avatar is also useful because the film offers globally meaningful set of images. In the U.S. the Na’vi may be the Halloween costume of choice, but in the West Bank village of Bil’in the Na’vi are a potent political symbol for a global audience. As Millner-Larsen points out, European bloggers were furious when Avatar lost to the Oscar Best Picture award to The Hurt Locker, which they regarded as militaristic.

With two more Avatar sequels in the works, the Na’vi may become overexposed, ameliorating their symbolic potency. Maybe the next global symbols of empathetic militancy will be hobbits. Peter Jackson is working on a pair of Hobbit films for release in 2012 and 2013.