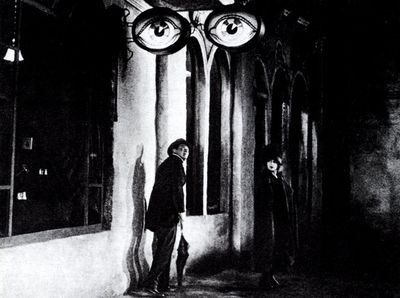 With Dave Kehr the latest to fall under the spell of the newly restored Metropolis, and retrospectives of Weimar cinema at MoMA and the Harvard Film Archives, there’s apparently a low-wattage vogue for interwar German cinema. (That’s Karl Grune’s Die Strasse [The Street; 1923] in the still above.) Can anything deeper be read into the revival of interest in Weimar cinema? Michael Atkinson comes close to suggesting there is: a period of polarized politics after military failure and economic disaster, with a right-wing backlash against the excesses of the wealthy and a social-reform political agenda.

Atkinson clears up one myth surrounding German Expressionism, the most famous style of the 1920s. Expressionism “was not a pre-auteurist confluence of like-minded maestros honing their individual visions but a house style of the nation’s sole state production company (Ufa), as institutionalized and commercial a project as the Lucas-Spielberg blockbuster aesthetics of ’80s and ’90s Hollywood.” He summarizes the style, a little glibly, as “pure eye-feast—the silent era’s Avatars, 300s, and Inceptions—than as a specifically Gothic idea.”

More usefully Atkinson also mentions non-Expressionistic films made at the dawn of the sound era. Little known in this country, they can be seen as precursors to the American film noirs.

Edgar G. Ulmer and Robert Siodmak’s Menschen am Sonntag (1930), assisted by Curt Siodmak, Fred Zinnemann, and Billy Wilder—is famously a gentle, observational precursor to ’30s Renoir and neorealism. That in itself was a vibe the smaller production companies pursued into the sound era, with Wilhelm Thiele’s rather French gas station musical Three Good Friends (1930), Paul Martin’s fanciful warbler A Blonde Dream (1932), Slatan Dudow’s edgily Communistic Kulhe Wampe (1932), and of course Leontine Sagan’s Mädchen in Uniform (1931), a somber, conscientiously un-Expressionistic parable of oppression and social power that, like many of the films of the day that dared to deal with contemporary life, was eventually Nazi-banned, their makers briskly vacating their homeland for Paris and Los Angeles by 1933.