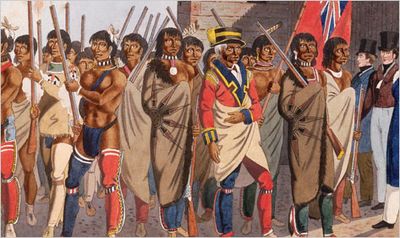 The former Confederate states are preparing to celebrate the 150th anniversary of the beginning of the American Civil War. There are plans for secession balls, parades, and a recreation of Jefferson Davis’s inauguration–everything but the slavery, in other words.

Historian Alan Taylor argues there was a civil war before the Civil War. In The Civil War of 1812: American Citizens, British Subjects, Irish Rebels, & Indian Allies

Everybody had a grievance. Irish republicans joined the Americans to fight the British. American slaves joined the fight on the side of the British, who dangled the promise of emancipation. French-speaking Canadians fought Americans trying for a land-grab. English-speaking Canadians attacked whichever side was losing in hopes of hurrying the war to its end. Native Americans sided with the British, who sold them out in the Treat of Ghent (1815), which ended the war and set the stage for the white settlement of Indian lands in the West.

In the chaos, we lost Detroit, then somehow got it back again. Taylor says we also managed to consolidate gains of the 1776 revolution, albeit with much less elegance than the previous war. There was no George Washington of the War of 1812. Its hero was a hard-drinking sociopath, Andrew Jackson. As for foundational documents, instead of the sublime Declaration of Independence, we got an unsingable national anthem. At least Detroit worked out, for a while, anyway.