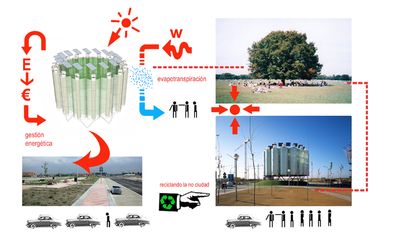 When I used to give classroom lectures I would find that my off-handed remarks would often stay with students longer than the main points of my lecture. Such a moment happened to me Wednesday night as I listened to Belinda Tato’s lecture, “Madrid—Urban Social Design.” During a discussion of the importance of networks and seeking out the help of professionals in other disciplines, Tato said, “Sometimes cities have too many problems to be solved by a single architect.”

Although she wasn’t talking about Philadelphia at that moment, her remark seemed to perfectly describe a project in which her firm Ecosistema Urbano participated. The project proposal, called Urban Voids, was intended as a city-wide solution to a number of problems, most acutely the high number of vacant houses. The Ecosistema Urbano architects wanted to throw a grid over the city—the first city in the world to be laid out on a grid—and find its hidden veins. The idea was to connect the urban voids through ecological corridors and to disperse towers housing alternative-energy generators throughout the city. The ultimate hope was to revitalize and integrate the city.

The Ecosistema Urbano did not win the competition. I don’t know which proposal won, but if implemented, it’s probably doomed to failure. Philadelphia, where I lived throughout the 1990s and still retain a great affection for, is a city of too many problems. Tato and her team had a vision of an architecture that would integrate people, but what makes Philadelphia unique and vital is precisely the cause of many of its problems. It’s a city of neighborhoods, but to a fault. People care passionately about their six square blocks, but too few people about the city as a whole. It’s a city riven by tribalism, yet the tribalism also inoculates Philadelphia from becoming just another generic city.

Tato presented a ten-part manifesto for urban planning and architecture. The Ecosistema Urbano manifesto calls for using design to enhance social interactions within a city. The points include creating vital public spaces, creating open networks, revitalizing the existing, finding inexpensive solutions, and staying positive. All ten points would have helped Philadelphia and a number of other cities.

Tato and her team have been most successful in their native Spain. Their best known, and most typical, project involved building an eco boulevard in Vallecas, a neighborhood on the outskirts of Madrid. The city is building huge housing projects that are as bleak as any American suburban development, with street after street of identical townhouses with hardly a blade of grass in sight. Like their American counterparts, the Madrid developments are built for cars. Recognizing they were ringing Madrid with soulless, claustrophobic neighborhoods, city officials decided the answer was more concrete—in this case, a boulevard, which they commissioned Ecosistema Urbano to design something, anything, better than yet another corridor of garage doors. Tato and her team had barely begun drawing up plans for the boulevard when the street contractor took it upon himself to construct the street and sidewalks. He even installed benches. The architects discovered the completed work after the concrete had dried.

Reluctant to ask the contractor to jackhammer 22,000 square meters of pavement—the contractor had already been paid, anyway—the architects started over. Tato’s solution was elegant, economical, and high-tech. The centerpiece of the project was three large cylindrical structures that creates a microclimate of cool, damp air for the sun-baked neighborhood. The main tower, which Ecosistema Urbano refers to as a “ludic tree,” anchors the boulevard. The tower has an open base, allowing residents to socialize inside. Concerts and plays are staged in the cool space. Birds nest in its rafters. The electricity generated by the tower is sold back to the local utility, generating enough income to pay for the tower’s maintenance. 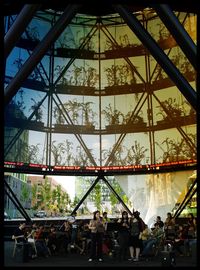 The ludic tree is a totemic space that beckons to pedestrians from the end of the boulevard. Part stage, part monument, part sanctuary, the tower turns citizens into participants in a kind of performance art. People perform for each other and for recalcitrant government.

The ecological tower is a favorite design motif for Tato and Ecosistema Urbano. They want to plant them in open fields, scatter them across the city of Philadelphia. They adapted the Vallecas eco tower for the humidity of Shanghai. The towers channel nature into urban space, creating a zone of open possibilities.

So how does a zone of open possibilities work in a city with too many problems? Tato discussed establishing open networks, creating channels for input, making an immediate impact–processes very different from the Frank Lloyd Wright model total design. In the Ecosistema Urbano vision, urban planning is a means of creating zones of open possibilities, however localized, so that multiple solutions can be applied, from the inside out, to the problem of the city with too many problems.