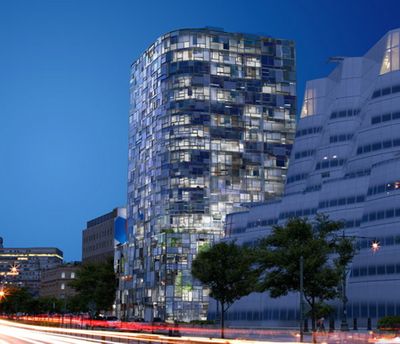 Blair Kamin asks the question, “Which city is the center of America’s architectural universe? NY, LA, Chicago, or none of the above?” The question is prompted by a volume of essays by Robert A.M. Stern, “Architecture on the Edge of Postmodernism,” in which Stern argued in 1979 that the center of architecture is New York, not Chicago, even though “architecture is Chicago’s dominant plastic art, just as film is Hollywood’s chief artistic product.” But Chicago is a mere “urban village,” a “company town” that produces “one or two things.” New York City, on the other hand, is “a metropolis, a world capital; architecture is dreamed here, realized everywhere.”

Kamin’s response is right on the money. Whatever validity Stern’s characterization had in 1979, it certainly isn’t valid now.

New York may still lead in talking, but the essence of architecture is building. And great builders and thinkers can be found all over, the Web’s distance-collapsing influence making an architect or an architectural dreamer in LA, Chicago, or even Des Moines as important as his or her counterpart on Park Avenue. Hey, New York–start spreadin’ the news: It’s a multi-polar architectural world out there. Deal with it.

We live in a postmodernist world, or perhaps more accurately, a post-postmodernist world. The center/margin opposition had already been desconstructed by 1979, during the heyday of postmodernism. A decentered world is a working condition of many, if not most, white collar workers. Great architecture comes from everywhere now. Lately I’ve seen a lot of inventive work coming out of Spain, especially Madrid and Barcelona. Cutting-edge practices with a global portfolio are based in Rotterdam, London, Copenhagen, Rome, Tokyo, and Los Angeles, among other places. Even in New York, high-profile projects most often go to out-of-town architects. Sure, New York architects Diller Scofidio + Renfro directed the Lincoln Center renovation and the High Line Park, but Yoshio Taniguchi (Tokyo) did the 2004 MoMA expansion, Kazuyo Sejima and Ryue Nishizawa of SANAA (Tokyo) designed the New Museum, Ateliers Jean Nouvel (Paris) created the 100 11th Avenue tower (pictured above, next to LA architect Frank Gehry’s IAC headquarters building), and Renzo Piano (Genoa) is working on the Meatpacking District Whitney. Maybe in 1979 architecture was dreamed up in New York and built elsewhere, but in 2010 architecture is built in the city, but conjured up elsewhere.