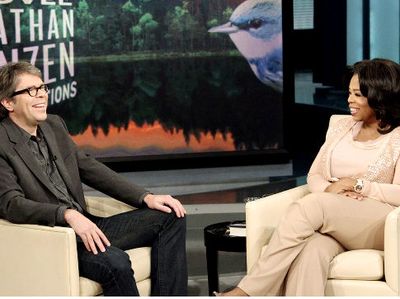 New York Daily News editorial board member Alexander Nazaryan caught Jonathan Franzen‘s appearance on Oprah and promptly began editorializing. He observes that Franzen sat with his hands on his knees, which is exactly how liberal elitists sit.  Noting that both Franzen and his character Walter both like birds, Nazaryan recognizes that Walter Bergland is Franzen. Nazaryan takes off from there:

Franzen embodies the left-leaning mirror image of the Angry White Male of the ’90s, the archetypal conservative middle-class Middle American whose fury, stoked by the likes of Rush Limbaugh, burned in the face of affirmative action and political correctness.

His Doppelganger, the Frustrated White Male, is more sophisticated but no more enlightened about this country’s rich multiplicity of opinions, cultures and predilections. His frustrations are different – corporations, Tea Partyers, NASCAR fans – but the basic content is the same: an anger at Americans’ essential stupidity, whether those Americans are Democrats (Newt Gingrich’s target) or book reviewers (Franzen’s).

A coating of irony, thickly applied, disguises Franzen’s sneering stance as a coherent response to the world, when it is really no more than a tantrum of the spoiled child.

So much for the intentional fallacy.