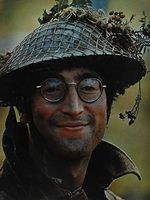 I remember switching on the radio one sunny winter day in 1980 to hear WXRT disc jockey Terri Hemmert say, “I’m just trying to get through this day the best I can.” Like a lot of teenaged boys at the time, I had a radio crush on Hemmert, and I immediately became concerned that the usually genial, quick-witted DJ was breaking down on the air. A few moments later, Hemmert, a devout Beatle fan, announced that John Lennon had been killed.

Everybody has their own John Lennon. From what I’ve seen of the remembrances of him on the anniversary of his death, an enduring favorite is the John Lennon of Double Fantasy, that home-baked-bread album that established his persona as the Domestic Beatle. My John Lennon, though, is the Political Beatle.

This Lennon was established in a much earlier solo project, the 1966 film How I Won The War, directed by A Hard Day’s Night director Richard Lester. Look magazine fumbles for words to describe the new Lennon:

Whoever would have dreamed that beneath that mop lurked a Renaissance man? Yet there, shorn, sits John Lennon, champion minstrel, literary Beatle, coarse truthsayer, who turned Christendom on with one wildly misunderstood gibe at cant. Now, face white, tunic red, playing wounded in a field of weeds, this pop-rock De Vinci is proposing to act for real. Relaxed to all appearances, he is all knots inside.