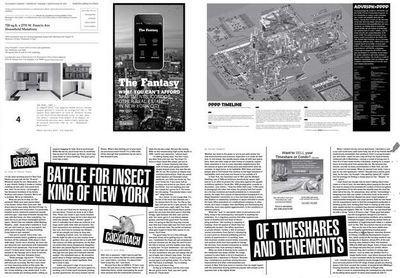 Last night was my company Christmas party and, appropriately enough for a publishing company in the last days of the printed book, it was a modest affair. I had one martini and a slice of quesadilla–not exactly a bacchanal. Media is undergoing huge changes right now. Where I work we have almost daily conversations about how the publishing and media landscape is changing. Mostly, we can’t decide what to do. However, as certain mediums disappear, others will take their place. This weekend is a good time to survey the current state of a rapidly changing landscape.

The Ninth edition of the Select Media Festival opened last night and runs through December 12th at Co-Prosperity Sphere and other spaces in Bridgeport, on Chicago’s South Side. The festival features video programs, performances and presentations in conjunction with live music and action. The centerpiece of the festival is a group exhibition, Infoporn II, which explores various forms of data visualization in the form of installations, a publication library, interactive projects, and infographics. Tonight’s feature is Emily Clayton’s Sad Cycle, a collection of sculptural works interpreting death rituals. The exhibition is part of a larger series examining grief. Sad Cycle will be on display from 6-9 PM at Eastern Expansion, 244 W 31st Street. Also tonight at a nearby venue is the Select Media Festival 9 opening party, starting at 7 PM at Co-Prosperity Sphere, 3219 S Morgan Street. Tickets are $6. There will be performances by J+J+J, Aleks Eva , Lord of the Yum Yum, and Michael Perkins. After 12:30 AM the party moves on to Maria’s at 960 W 31st Street. From 6-9 tomorrow night at Co-Prosperity Sphere is Meet the Presenters, during which “Pechu Kucha-toids, 20 X 20-ers, video curators, powerpointers, and Tour Guides of reknown explain their work in a simple lecture presentation format and screening.” Sunday’s closing event will be BYOB (Bring your own Beamer), an exhibition of projected artwork. The exhibition was inspired by an idea by Berlin-based Rafa√´l Rozendaal. More information about the SMF9 event can be found here.

The SMF9 is connected to The New City Reader: A Newspaper of Public Space, which is one of the most interesting exhibits taking place anywhere this winter. Curated by Kazys Varnelis and Joseph Grima, The New City Reader is a performance-based editorial residency designed as a part of the Last Newspaper, an exhibit running at New York’s New Museum from October 6, 2010‒January 9, 2011. The New City Reader comes in one edition only, but each week over the course of the project a new section will appear within the New Museum’s gallery space as well as in public spaces throughout New York for collective reading. Like any other newspaper, The New City Reader will have classifieds, but don’t expect ordinary classifieds. They will be administered by LGNLGN and, instead of advertising used Honda Accords and the like, the New City Reader’s ads will “map longing, desire, guilt and regret in the city, as well as the city’s losses and desires.” Ads are free.

This weekend is the second to last for the Bank of America Cinema, which is closing after 39 years of operation. The movie theater is located in a Portage Park bank that is being sold, and while the new owners may keep the unique theater open, managers Michael Phillips (no relation to the Tribune critic), Rebecca Hall and Julian Antos anticipate they won’t. The theater specializes in old films that aren’t on DVD. Tomorrow night’s feature is Arthur Penn’s conspiracy thriller/surrealist noir Mickey One (1965), starring Warren Beatty as a paranoid comedian fleeing the mob in Chicago. (Much of the film was shot on location here.) The last film will be screened on December 18. It will Laurel and Hardy’s Babes in Toyland (1934). Admission is $5 and popcorn is $1–practically Depression-Era prices.

The future of everything, it seems, is online. The excellent online journal MAS Context just published their latest issue, PUBLIC. This issue looks at the public in all its forms–the public sphere, public space, the public as a collective. I’ll have more on the issue next week.