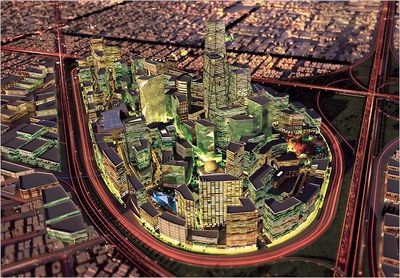 Nicolai Ouroussoff has a long and fascinating look at King Abdullah Economic City, an entirely new city being built on near the shores of the Red Sea in Saudi Arabia. King Abdullah Economic City (KAEC) is combines elements of a Chinese-style special economic zone with an American-style martinis and miniskirts zone for foreign oil executives, with a dash of Houston thrown in. On one level, KAEC is a kind of giant foreign exchange student program, with Westerners invited to meet a select group of Saudis.

KAEC [. . .] aims to draw a range of Western corporations and their employees, as well as their expertise, to create a social mixing chamber. The core of the city will be a business district much like the one on the outskirts of Riyadh. Residential areas will be interlaced with the kind of open public spaces — parks, plazas and the waterfront promenades — that are generic in large Western-style developments but almost impossible to find in Saudi Arabia.

Artists’ renderings of the project show couples happily strolling around the city dressed in an ambiguous mix of Islamic and Western styles. A video of the future university has women, their heads covered but otherwise in Western-looking dress, mingling with men on campus. To encourage more foreign companies and their employees to come here, the government will allow foreign ownership for the first time. And officials say the city will have a streamlined bureaucracy, so that unlike in other Saudi cities, where delays can make even the simplest transactions stretch out for days, action on visas or customs documents will take just an hour.

As you might imagine, Saudi religious conservatives are up in arms, but Ouroussoff cites another, and more telling, objection.

Several people here expressed outrage that the government was pouring billions of dollars into the creation of entire new cities while large areas of existing ones had deteriorated into slums. Jidda, for example, already has a port in desperate need of upgrading. Its historic center is a medieval slum inhabited by foreign laborers. The city has no sewer system, only septic tanks that regularly spill into the streets. And people who live there will have to continue living by the old rules.

King Abdullah is essentially building a new Saudi Arabia inside the old one. The existing petrostate can’t survive indefinitely, and the King knows it. Unless the government shifts the epicenter of the national economy away from the Ghawar oil field, the nation will become ungovernable. It may even cease to exist as a nation state.

King Abdullah Economic City has sinister elements—the tight security, the lack of integration with existing urban areas, the ugly architecture. But what planning city didn’t have a political, even authoritarian, dimension at its founding? As Michel Foucault has argued, the modern planned city began in the eighteenth century, when architecture became part of the development of how entire societies should be governed. Buildings and urban planning became concerned with questions about how a society should be ordered to avoid revolts and epidemics while ensuring a decent family life. These questions came up before, such as during the Roman Empire, but not to the systematic extent that they appeared in the 18th century. Architects didn’t initiate the change, politicians did. And politicians still are.