To show that literary critics really can write cogently about other cultural products, here is English professor Wendy Steiner on the artist’s model in her new book, The Real Real Thing: The Model in the Mirror of Art

[T]he form of a modernist work is often the only referent it has: what it signifies is its own form. Critics through much of the past century (and still today) have treated this self-reflexivity as a measure of a work’s artistic excellence: the more pronounced the self-reference, the purer and more uncompromising the art . . . [For example,] Jacques Derrida claimed, “There is nothing outside of the text” . . . The model, by contrast, is by definition “outside the text” insofar as she is an independently existent being. Thus, when art specifically focuses on its model, it stresses important aspects of aesthetic experience that were typically deemphasized in modernism: the work’s connection to extra-artistic reality, the inseparability of creation from communication, the interactivity of the parties involved, gender-related issues of agency and passivity, and so forth. 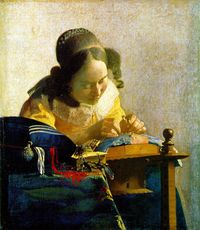 For Steiner the contemporary use of model is exemplified by Ann Hamilton’s installation mantle (1998) in which the artist invokes the Dutch genre paintings of Vermeer. In place of Vermeer’s (and modernism’s) rigid hierarchy of artist, model, and viewer, Hamilton places herself in the position of the model and invites the viewer to share the space of representation. Hamilton the artist/model remains stubbornly present, unlike the models who sat for Picasso only to see themselves transmogrified beyond recognition, beyond personhood, in the final painting.

But other than calling attention to the gender relations in the artist/model relationship, never very far from the surface even in Picasso–or Vermeer for that matter–what is Hamilton really doing? Is she updating Dutch genre painting into the genre of instillation art, which isn’t any more “real” than a Joseph Cornell box? Or is she doing something else?

Hamilton’s works are eerily powerful when experienced in person. To my mind, though, the source of their power isn’t the presence of a model, which she uses occasionally, but the uncanny woven objects that appear throughout her works. The woven objects–fields, really–express a fascination with the unnameable. They seem older than writing, although no pre-literate culture would ever construct an object based on repetition. Sitting beside the lumpy mass, the model in mantle seems commonplace and departicularized, a supplementary object in a scenario drained of the psychodrama one usually encounters in instillation art. The model is the conduit for language into the artwork, not a point of resistance.