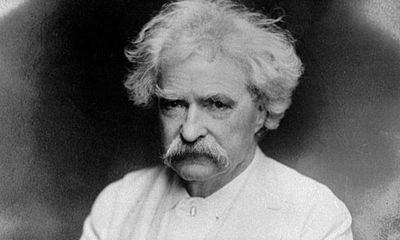 On Tuesday, Publisher’s Weekly announced New South Publishing will release a new, racial epithet-free version of Huckleberry Finn. Here’s a sampling of reactions from around the Web, as well as one relevant quote about silence in discourse.

“Art should provoke more questions than answers and most of all, should make us think about what we rarely want to think about at all.” — Dorothy Allison, “This Is Our World.” Quoted in Mary Elizabeth Williams, “‘Huckleberry Finn’ loses the N-word.” 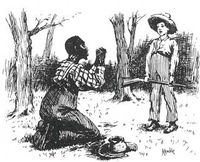 “Twain was undoubtedly anti-racist. Friends with African American educator Booker T Washington, he co-chaired the 1906 Silver Jubilee fundraiser at Carnegie Hall for the Tuskegee Institute – a school run by Washington in Alabama to further ‘the intellectual and moral and religious life of the [African American] people’. He also personally helped fund one of Yale Law School’s first African American students, explaining: ‘We have ground the manhood out of them [African Americans], and the shame is ours, not theirs, and we should pay for it.’ And his repeated use of that derogatory term [219 times] in Huckleberry Finn is absolutely deliberate, ringing with irony.”–Peter Messent, “Censoring Mark Twain’s ‘n-words’ is unacceptable.”

“Frankly, I just can’t teach [Huckleberry Finn] any longer. I know it’s great, and I can lecture for a day or so about how Twain is being faithful to the dialects and to the way that people spoke back then. But trying to lecture about its literary merits takes a back seat when I see how African American students (I’m talking about teenage sophomores, taking the class for core credit) are reacting to the iterations of THAT WORD. The problem is that Twain doesn’t distinguish between those who are using the word in a ‘kindly’ manner (we could probably assume that this is the only word for black people that Huck has ever heard) and those who are using it an an epithet. Used indiscriminately in these ways, it just makes everyone in a classroom uncomfortable.”–Sam Gwynn, quoted in “But wait! It gets better! More on Huck Finn and the n-word.”

“Re: Huck Finn issue: I’m facing a problem w/a quote in my book that includes a hideous word. Do I use it? I can hardly bear to TYPE it.” — Susan Orlean (@susanorlean), on Twitter.

“Silence itself—the things one declines to say, or is forbidden to name, the discretion that is required between different speakers—is less the absolute limit of discourse, the other side from which it is separated by a strict boundary, than an element that functions alongside the things said, with them and in relation to them within over-all strategies . . . There is not one but many silences, and they are an integral part of the strategies that underlie and permeate discourses.”–Michel Foucault, The History of Sexuality.

“Huckleberry Finn, one of the few arguments where realists & racists will take the same side. Keep the book the way it was. Censorship sucks.”–Brad Just (@justbrad), on Twitter.

The New South edition of Huckleberry Finn is “designed to make the book more teachable in the classroom, but the n-word’s absence can only draw attention to its presence, which any honest person teaching the book would have to acknowledge; and if you do that, it’s a short distance to the angry parent calling the principal to ask what the hell kids are being taught in there, defeating the purpose of the whole enterprise. If NewSouth’s version isn’t pointless, then it’s cynical: It hopes that students and teachers won’t push against the text too hard or ask too many questions of it.”–Mark Athitakis, “Edited for Content.”

“It’s great that they took the N-word out of ‘Huckleberry Finn.’ Now get to work on ‘Moby D-Word.'”–Stephen Colbert (@StephenAtHome), on Twitter.