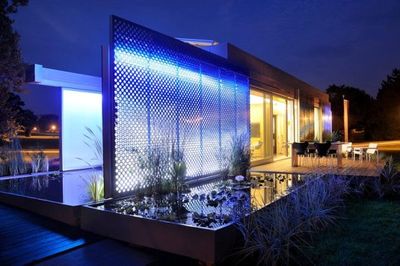 Virginia Tech’s Lumenhaus, which gets around a lot for a house, now resides next to Mies van der Rohe’s Farnsworth House in Plano, Illinois. Lumenhaus is supposed to be a high-tech updating of Mies’s classic. As Avinash Rajagopal writes in Metropolis, when the Lumenhaus reopens to the public this spring,

we will be able to see what we have gained [in the sixty years since the Farnsworth house was built]– in technology and sensitivity to the environment – but also perhaps what we have lost. The Farnsworth house is an ethereal glass box, floating above the ground, all but disappearing into its landscape. The Lumenhaus is a decidedly more substantial creature: all shining steel, gray photo-voltaics and colorful lights. The energy efficient house might be doing more to protect the environment, but it is undoubtedly the Farnsworth house that affords a deeper and more satisfying aesthetic appreciation of nature.

This is a keen observation, but technology isn’t the only basis of comparison between the two structures. Technology has a history, of course, but so does nature. Walter Benjamin’s concept of “historical nature” refers, among other things, to the proposition that nature enters history as something created. For example, Benjamin regarded Jugendstil (a version of Art Nouveau) as part of a reactionary struggle against the onslaught of technology, which Jugendstil strives to “sterilize” by “ornamentalizing” technology with natural forms, thus severing “technologically constituted forms” from their “functional contexts” and turning them into “natural constants.” Nature enters history in highly stylized form as a trove of images to be used to negate technology. Similarly, green technology regards nature not as something to be rescued from technology itself. The modernists mourned a banished nature; the green technologists worry about a perishable nature. 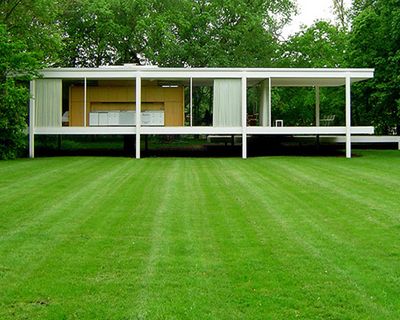 Put less abstractly, consider for a moment the large grassy area around the Farnsworth house. Modernist houses in the International Style have a small footprint on a large lot. (Which, by the way, makes them prime targets for demolition.) The large lot is a stage for the nature/technology interaction. Now, however, we regard large lots as wasteful. True sustainability requires density–in other words, a deliberate retreat from nature in order to preserve it. All those photo-voltaics can’t obscure the fact that the Lumenhaus will luxuriate in its mentor’s green space, two pristine standalone objects united by a strictly controlled nature.