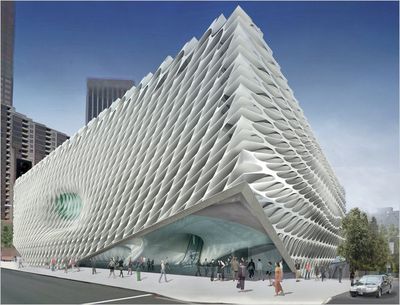 There’s a boom going on in museum building in the United States right now. Some of these projects were initiated before the recession started, while others are new projects. James S. Russell has a rundown on the projects.

Russell’s list is remarkable, but he doesn’t speculate about the possibility of a revival in real estate development. A few of the museums are billionaire’s vanity projects, like Eli Broad’s Broad Art Foundation (Diller Scofidio & Renfro’s design proposal is pictured above) and Alice Walton’s Crystal Bridges Museum of American Art in Bentonville, Arkansas (Moshe Safdie). Others are small museums trying to move up in the cultural institution hierarchy. Two examples are the new Philadelphia Barnes Foundation, designed by Tod Williams and Billie Tsien, and the Isabella Stewart Gardner Museum in Boston, designed by Renzo Piano. The projects all share one common feature: not one employed a local architect as the lead designer.

In the current climate, any kind of construction activity is good. But do we have enough good art to fill all these museums? Do patrons have sensible shoes to trudge through all these new spaces? Are these institutions prepared for the administrative overhead of supporting larger spaces?

It also seems a little disconcerting to read about high-profile and very expensive projects in the public sphere on the same day that stories like this one about the ongoing housing crisis are published. Maybe it’s time to think about priorities in philanthropic giving. There are tax breaks for giving to a museum, but heaven forbid tax rates on billionaires should be raised to stimulate the broader economy.

All things considered, though, the museum boom is a net positive. Bringing more art to the public is always a worthwhile endeavor. Public institutions have, in general, been much more supportive of quality architecture than private-sector developers. And who knows — maybe a new form of trickle down economics will come into being, with public projects stimulating the private housing market.