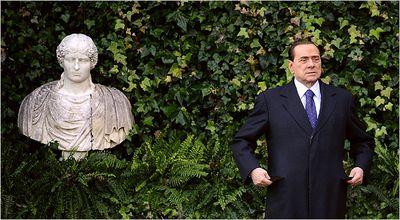 Slavoj Žižek weighs in on the WikiLeaks controversy with characteristic dialectical zig-zags ending in an apocalyptic vision.

He starts in one of his favorite places: American popular cinema. Julian Assange, WikiLeaks’s director, corresponds to the Joker in Christopher Nolan’s The Dark Knight. In Nolan’s film district attorney Harvey Dent and police commissioner Gordon collude to cover up the truth about Dent’s vigilantism in order to preserve the social order of Gotham City. The Joker threatens to reveal the truth behind the lie that holds society together. Julian Assange, in the same manner, wants to reveal the truth behind the “necessary lie” conservative philosopher Leo Strauss identified as the glue that holds democracy together. In Strauss’s view, or rather in Žižek’s view of Strauss’s view, elites obscure the material relations of economic and political power from the gullible masses through soothing fables of social harmony.

Yet Assange only appears to have pulled back the curtains of the necessary lie. Žižek pins the “liberal ideology” of All the President’s Men and The Pelican Brief on WikiLeaks. The free flow of information, this line of thinking goes, is sufficient to speak truth to (and about) power.

For all its reformist zeal, however, WikiLeaks didn’t tell us anything we didn’t already know about the working of the American State Department. For Žižek,

The only surprising thing about the WikiLeaks revelations is that they contain no surprises. Didn’t we learn exactly what we expected to learn? The real disturbance was at the level of appearances: we can no longer pretend we don’t know what everyone knows we know. This is the paradox of public space: even if everyone knows an unpleasant fact, saying it in public changes everything.

We could see for ourselves that Italian Prime Minister Silvio Berlusconi is a buffoon. It’s oddly comforting to find out that American diplomats think he is, too. But for Žižek, this is precisely the problem. We can no longer pretend that Berlusconi isn’t running a clown democracy, that we needn’t worry about a bullying moron taking over an industrialized nation through media manipulation.

Finally, we have the truth about the workings of American diplomats–or more accurately, one percent of the truth, if WikiLeaks’ extortionist threats are to be believed. Now what do we do? One thing we’re not doing, Žižek claims, is feeling ashamed about how we’re complicit with the corrupt power relations in the United States.

This is precisely our situation today: we face the shameless cynicism of a global order whose agents only imagine that they believe in their ideas of democracy, human rights and so on. Through actions like the WikiLeaks disclosures, the shame – our shame for tolerating such power over us – is made more shameful by being publicised. When the US intervenes in Iraq to bring secular democracy, and the result is the strengthening of religious fundamentalism and a much stronger Iran, this is not the tragic mistake of a sincere agent, but the case of a cynical trickster being beaten at his own game.

There must be a Hegelian term for when things get dodgy in the dialectic. First of all, in the U.S. we’ve already had our moment of shame and moved on to a particular form of apocalyptic anger in the form of the Tea Party and other loudly disgruntled groups. Žižek is no Tea Partier, but he shares their nihilism in his demands that the only honest way out of our shame is total revolution, the contours of which he neglects to provide.

Žižek is reading a lot of Hegel these days. Too bad he’s left behind his original intellectual mentor, Jacques Lacan, who would have dismissed the Tea Partiers as a bunch of hysterics and reminded Žižek the truth remains forever veiled, that whatever shame we may feel is actually a méconnaissance, a false recognition. Even the Joker has to subscribe to the necessary lie that his criminal schemes seek something real.