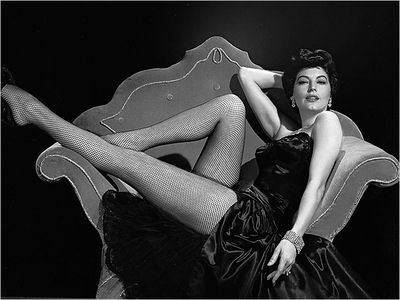 We’re accustomed to thinking about how film styles and technologies have changed over the years, and even casual cineastes are familiar with the industrial history of the medium. Movies stars have only one generally-recognized historical quality, and that’s glamor. Films may change, but movie stars are like nature: appearances may change, but the essence doesn’t.

In 1972 the French film critic Edgar Morin wrote an essay, republished in Senses of Cinema, of Ava Gardner, the “little shopgirl from Prisunic” who became perhaps the most beautiful movie star of all time. There will never be another Ava Gardner because her historical moment has passed. Her type has disappeared from the Hollywood cinema.

She flourished in the years after World War II, when escapist glamor disappeared from Hollywood films in favor of a gritty realism. Gardner combined the unearthliness of 1930s actresses with a franker postwar sexuality. Marin says her power as a star lies in her “double sovereignty” over body and soul. Her beauty was exotic yet self-possessed, lending her, in Marin’s words, a “mythic power that creates divinity.” Marin says her best role was in Pandora and the Flying Dutchman (1951), a strange British production shot in Spain. Gardner plays Pandora, a goddess Marin describes breathlessly as “at once mad of body and mad of soul. All men who go near her become her worshippers.” Marin continues,

With Pandora, Ava Gardner at last achieves what was only apparent in a fragmentary, atrophied or allusive state in her previous films. She is revealed in her feminine plenitude, that is, at once plenitude and passion, sexuality and soul. But this plenitude is torn: between sexual needs and the needs of the soul, there is a radical divorce. None of Ava’s lovers brings her love. He who finally shows true love for her is only a ghost.

Perhaps this was true even in her real life. At 19 she married Mickey Rooney, enduring a marriage she tartly described as “Love Finds Andy Hardy.” After her divorce she had a well-publicized affair with Howard Hughes, followed by a second marriage to the bandleader Artie Shaw. In 1951, a year before the photograph above was taken, she lured Frank Sinatra away from his first wife, a great scandal at the time. Sinatra was crazy about her. Supposedly he learned how to sing torch songs from her. After six years of marriage, she dumped him for a bullfighter.

The only time Gardner was able to strike a balance between her ethereal persona and the demands of a Hollywood female lead was The Barefoot Contessa (Joseph L. Mankiewicz, 1955), a period melodrama at once lurid and high-toned. Marin says she was also good in film adaptations of the novels of Ernest Hemingway, with whom she had a platonic friendship. In fact, it was Hemingway who introduced her to the bullfighter who became her fourth husband.

Today there are plenty of actresses who can play spunky, but none who can play demi-goddess. Angelina Jolie has copped some of Gardner’s tough-minded smolder, mostly around the lips, but there’s no madness of either body or soul going on with her. Whatever feminine plenitude is, I doubt it exists any more.