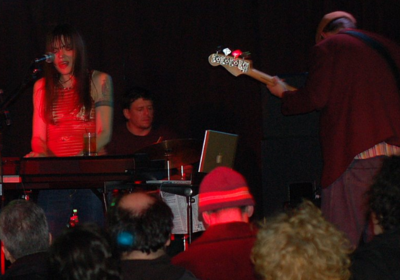 Last Friday I met with Kênya Zanatta, the assistant director and co-screenwriter for a documentary film about the post-rock movement in 1990s Chicago. The film is directed by Augusto Contento, who also made three lyrical documentaries set in Brazil: Tramas (2008), Strade Trasparenti (Transparent Roads, 2008), and Strade d’Acqua (Roads of Water, 2009). The working title of the film is Parallax Sounds.

The Chicago post-rock movement centered around the Wicker Park neighborhood seems like an unlikely subject for the Paris-based crew. Zanatta explained that Contento became a fan of the music in his native Italy, where it was very popular in the 1990s. Contento had already worked with post-rock musician Ken Vandermark, and the jazz musician figures prominently in the new film. (Vandermark is currently preparing the Strade d’Acqua soundtrack for release and he was also the subject of Daniel Kraus’s film Musician.) Other musicians who will appear in the film include David Grubbs, Damon Locks, Steve Albini, and Azita Youseffi (above). Thrill Jockey Records founder Bettina Richards will also be interviewed.

Zanatta, a Brazilian native now living in Paris, is in Chicago to scout locations and prepare the musicians for their filmed interviews. Contento uses a lot of long-duration tracking shots, so Zanatta is looking for place where Contento’s camera can settle in and do its work. I’m imagining a cross between the tracking shots of New Orleans in Jim Jarmusch’s Down by Law, which were filmed by a camera mounted on the gate of a hand-pushed station wagon, and the city symphony sequences in Walter Ruttmann’s Berlin, Symphony of a Great City, shot with a camera hidden in a valise. In any case, filming of Parallax Sounds begins in March.

Contento’s camera will also be led around by the musicians, who will give tours of the city as they know it–or once knew it. None of the musicians featured in Parallax Sounds originally comes from Chicago, and several of them no longer live here. As a result, Parallax Sounds will look at a particular place and a particular time from an outsider’s perspective. The film is being produced by Cineparallax, a French independent production company founded by Contento and Giancarlo Grande. Funding for the project comes from the Centre National de la Cinematographie’s COSIP initiative and the North Rhein-Westphalia Film Fund. The producers are working with other production companies in Germany (Troika Entertainment), Italy (First Sun Produzioni), and Finland (the television network YLE). The only stateside production support comes from Bulletproof Films, the Chicago film production company responsible for the excellent documentary William S. Burroughs: A Man Within, directed by Chicagoan Yony Leyser. So far distribution arrangements have been made in France, Germany, and Finland.

Cineparallax will probably land an American distribution deal, and it will be interesting to see how the film is received here. The term post-rock is rarely, if ever, used to describe music being played today. The sense of crisis in the 1990s, when American popular music was caught in the grip of M.C. Hammer, has largely passed, although rock music sales still lag behind rap and country music. The 1990s generation of musicians were the last to work before Napster blew up the music business. The Chicago that fostered musical and artistic experimentation has largely disappeared, too. Baby strollers now outnumber electric guitars in Wicker Park. While there are some interesting bands based in the city, and post-rock fixtures like Tortoise still play here, the local music scene lacks the cachet of Austin, Brooklyn or Montreal. Considering the me-too indie music scene here, it’s fitting that a group of Europeans remember when Chicago was at the center of the alternative music world.

Parallax Sounds is scheduled to be complete in October, 2011.