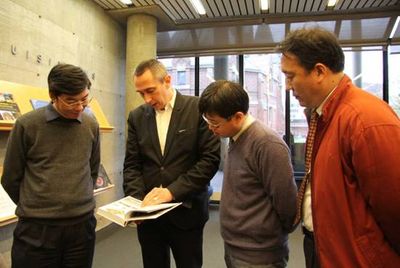 There’s a war going on for your garage.

On one side are the New Urbanists, the sworn enemies of off-ramps. On the other side are landscape urbanists who say you can keep your two-car garage if you install a rain barrel beside it. The leader of the landscape urbanists is Charles Waldheim (above center), the chair of the landscape architecture department at the Graduate School of Design at Harvard University. He has spiky hair and dresses all in black. The New Urbanists are led by architect Andres Duany, who screens videos of Waldheim’s lectures as if they were horror films.

Each camp has their reasonable side, as well as their counterintuitive side. The landscape urbanists recognize that the U.S. has already made a huge investment in its suburban infrastructure, and it’s impractical to expect Americans to abandon their cul-de-sacs and move downtown. The division between city and suburb is artificial; together they form a single entity. It’s possible to plan suburbs that respect the pre-existing ecosystem. However, these tenets fly in the face of planning orthodoxy (and not just New Urbanist theory) that says, everything else being equal, density is more sustainable than sprawl. It doesn’t help that the landscape architects like to use a forbiddingly abstract language that makes them sound like Jean-François Lyotard on a vegan diet.

The New Urbanists, on the other hand, make the sensible point that people still like the physical environment of 19th-century towns and cities, or at least its idealized version. Studies have shown that suburbanites are more depressed and less healthy than their urban counterparts. Density fosters creativity and efficiency alike. An automobile-based economy and infrastructure will come to grief eventually. But while people might like strolling through a townhouse/corner shop neighborhood, they don’t necessary want to live in one, especially if they have to parallel park. New Urbanists can sound like neo-conservative scolds in their efforts to change human behavior. There’s something wrong about trying to remake 21st-century metropolises into 19th-century cities.

For years the New Urbanists’ natural enemies have been Modernists with their glass towers and vast lawns. Waldheim represents a new threat. He’s liberated landscape architects from their traditional roles as bush planters who come in after building architects complete their work, a role once described as “putting parsley on the pig.” He’s given landscape architects swagger. He’s seized Harvard for them. But will the landscape urbanists do anything for the rest of us besides erect swing sets over our garbage dumps?