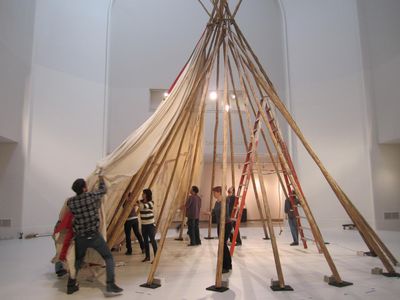 I missed Ken Vandermark and Jason Moran’s performance at the Green Mill because babysitters don’t answer the phone when it’s five degrees Fahrenheit out. While there are some interesting things going on in Chicago right now, such as the MCA’s Urban China: Informal Cities exhibition, it’s probably best to stay indoors until the snow pack has melted down a bit. Besides, there’s work to do. I’m putting the finishing touches on a redesign for One-Way Street. Like all website redesign projects, there’s a lot more work to be done than I originally thought. I’m shooting for a Monday launch.

Speaking of redesign projects, the deadline approaches for submissions to the Network Reset: Rethinking the Chicago Emerald Necklace competition. Entries must be entered by February 21.

For those of you in New York City here are some recommended events.

The Brooklyn Museum is gearing up for its new exhibition, Tipi: Heritage of the Great Plains. The exhibition looks at the role of the tipi in culture of Great Plains tribes. A major theme of Tipi is the role of women as the owners and makers of the tipi, along with everything in it, including the furnishings, clothing, and accessories. (The men got the outside of the tipi, which was reserved for illustrating their exploits as warriors and hunters.) The exhibit features more than 160 objects from the Museum’s collection of Plains material, supplemented by works from other museums and objects by contemporary Plains artists. There will be three full-size tipis, including the one by Lyle J. Heavy Runner (the designer) and Naomi Crawford (the maker). Their tipi (shown above in a photograph by Keith Sirchio) is shown above during its instillation. The exhibition begins February 18 and runs through May 15, 2011. More information can be found here.

Meanwhile, over in Queens, phati’tude Literary Magazine will launch its first annual African American Literary Festival n February 26, 2011. The festival will take place at the Queens Library’s Langston Hughes Community Library & Cultural Center from 10:00am until 4:00pm. There will be workshops, a panel discussion, poetry readings, a musical performance, a short-film premiere and book signings. Additionally, the Winter issue of phati’tude Literary Magazine, “Celebrating Black History Through Literature: From the Harlem Renaissance to Today” will be unveiled, featuring local and nationally recognized writers Amiri Baraka, Quincy Troupe, Ishmael Reed, Shonda Buchanan, devorah major, Yusef Komunyakaa, Stephani Maari Booker, Tony Medina, Askia Toure, Haki Madhubiti, among others. The festival is free and open to the public. You can register here.

Next Friday, February 18, the Columbia University and the Columbia Building Intelligence Project will stage the fourth International Think Tank, entitled “(Re)Searching Knowledge.” Participants will discuss the future of the building industry in four 90-minute sessions pecha-kucha style, which will keep the proceedings moving along.  Here are the four sessions:

The talks will take place between 9:30 am and 5:00 pm at The Center for Architecture, 536 LaGuardia Place. A reception will follow. The sessions are open to the public, but reservations are required. You can make them by e-mailing the C-BIP staff.