Thirty-one years before German re-unification, Theodor Adorno called encouraged his fellow Germans to start “working off the past” (Aufarbeitung der Vergangenheit). He declared, “what is conscious could never be as fateful as what is unconscious, semiconscious, or preconscious. It comes down to how the past is made present — whether one stops at mere accusation of stands up to the horror, though one’s power to comprehend even the incomprehensible.”

Adorno was referring to the Nazi past, but the events of October 1990 complicated matters. The asymmetrical nature of German reunification raised a whole new set of questions. Is de-Stasi-fication the same as de-Nazi-fication. What does it mean when your entire country–the GDR–disappears virtually overnight? 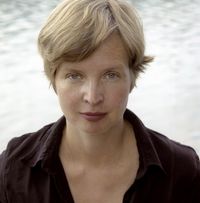 Jenny Erpenbeck’s haunting novel Visitation (Heimsuchung, literally, “homeseeking”) is a working off the past. Set in a house by a lake in Brandenburg, the novel covers, in a cunningly oblique manner, on the ways the past is made present through the characters’ work upon the land. The narrative progresses through a series of interrelated tales about the conflicts suffered through and perpetuated by the German population during the Jahrhundertwende, the turn-of-the-century shift, and over the following decades of war, National Socialism and Soviet occupation.

The stories are told in a mesmerizing style heavy on repetition and light on dramatics. We get no insight into the characters’ consciousnesses. With no cues to signal an emotionally and morally laden moment, a reader has to pay careful attention to externals. A Jewish couple’s death in a Nazi gas truck is told in one sentence: “Arthur’s eyes pop out of their sockets as he asphyxiates, and Hermine in her death throes defecates on the feet of a woman she’s never seen before.” An architect supplants and the Jewish family, but we only see him taking a swim and wiping himself dry with one of the towels that are still hanging in the bathing-house “before it could occur to his wife to wash them.” He congratulates himself for having given the Jews the full half market-value set by the law, and for helping them escape persecution. “Strange towels,” he reflects. “Cloth manufacturers, these Jews. Terrycloth. Top quality goods.”

The elliptical, repetitive style reflects an absurd world where meaning doesn’t stick to things. The solidity of the house and the permanence of the lake are illusions. Everything is transient. A prologue enacts the violent drama of the lake’s Ice Age creation, reminding us that even lakes are historical objects. As the abrupt disappearance of the GDR illustrates, history is full of ruptures. The Brandenburg property is owned by the same family for 200 years before the family line ends in infertility and madness in the late 19th century. Meanwhile, the nearby village languishes in a magic realist stupor, waiting for modernity to finally arrive. When it does, imperial authority is replaced by an absent cause–ideology in its most potent form.

The only semblance of continuity in the novel is an unnamed gardener who tends to the property as it passes down from owner to owner. His ceaseless labors are recited in the same matter-of-fact tone as the rest of the action. “After the Russians have pulled out, the gardener prunes the shrubs and bushes in the hope that they might bud a second time.” Nature must be constantly re-culturalized, rescued from the mythic forces that drive history, both natural and social.

In contemporary Germany there’s a saying, “Only Germans born after October 1990 will be united.” Erpenbeck is still a young novelist with a small but highly distinguished body of work. She’s a member of that generation that will always be riven by history. The house in Visitation symbolizes the repeated ruptures of history and identity. The fictional house is based on a summer house outside Berlin that had been in Erpenbeck’s family’s possession from 1954 until 2002, when they lost the property to the heirs of its wartime owners. Originally, Erpenbeck intended to write a non-fiction account of the house’s history. She ended up not only dispensing with historical discourse, but she also eschewed conventional historical fiction discourse, with its easy conclusions and reassuring compensations. Instead, she produced a novel the unconscious side of history, its most optimistic and dangerous side.