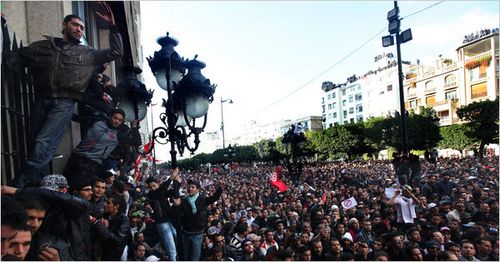 Let’s say you want to overthrow an authoritarian dictatorship. How do you go about it? Obviously your first step would be to set up a Facebook page, because that’s what Che Guevara would have done. Then you practice Tweeting in a cloud of tear gas.

If those measures don’t topple the dictator, then you need to open up your PDF reader and download this. It’s a handbook for overthrowing a dictatorial regime written by Gene Sharp of the Albert Einstein Institution. Sharp doesn’t mention the revolutionary potential of friending, but he does strongly recommend non-violent resistance for entirely pragmatic reasons. Violent rebellion only plays into the dictator’s strengths. Guerrilla warfare takes a long time and has a “very strong tendency” to inflict “immense casualties among one’s own people.” With enough discipline and resolve, non-violent means work almost every time. Sharp has a list of no fewer than 198 methods for inciting rebellion, most of which involve some variation of sitting in the street and refusing to budge, no matter what.

Method number 78 is “Workmen’s boycott.” General strikes are considered to be the tipping point in the rebellion again Egyptian President Hosni Mubarak. Potentially, labor strikes could also prove critical to toppling the government of President Mahmoud Ahmadinejad of Iran. At least, that’s the hope of Mansour Osanloo, Ali Reza Mahjoub, and other labor leaders in Iran.