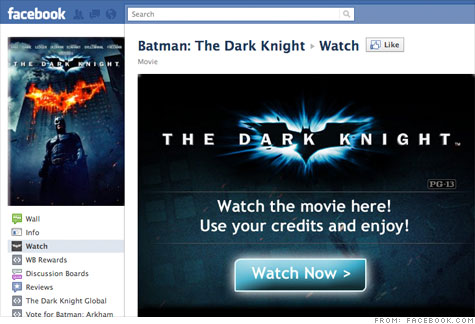 Yesterday Warner Bros. Entertainment said it will start renting movies via Facebook, the latest effort by movie studios to find new revenue sources as consumers buy fewer DVDs and spend more time online. The first WB film offered on Facebook is The Dark Knight.  Users can watch it as many times as they like for 48 hours on Facebook for 30 Facebook credits, which is $3 in offline-world currency.

The announcement attracted interest from two communities that don’t talk to each other much, but should.

Tech sites treated the announcement as just another consumer service, and not as a technology of interest in its own right. PC World listed the pros and cons of the new Facebook service. Sharing comments with your followers was listed as a pro; a con was that you had 48 hours to watch the movie, while Netflix lets keeps it available until you get around to watching it, so long as you pay your monthly fees. Mashable was more interested in the prospect of a Facebook currency. “For Facebook, this is another good way to establish Facebook Credits as an important online currency. Even more importantly, with more than 600 million active users, Facebook could become a serious competitor to digital distribution companies such as Hulu and Netflix.”

As for streaming services in general, the question comes down to a matter of convenience versus quality.

The reaction in the tech world reflects its general indifference toward content beyond certain sanctioned genres, like science fiction or action films. But the specs for the new iPad 2 are different matter altogether.

Film people, on the other hand, were interested in the personal and historical dimensions of streaming. Roger Ebert isn’t opposed to streaming movies.

I’ve had many good experiences watching steaming movies, but I watch them almost exclusively on my HDTV, using the Roku Player. Movies can also be streamed into televisions via X-Box, PlayStation 3, some Blu-ray machines and other devices. I get them from Netflix and Amazon. They look about as good as a DVD. I even stream movies via Roku to a screen on the wall in our Movie Room which uses an overhead projector and a big wall screen, and they look great there, too.

But he has his limits: “I have never watched a movie on my iPhone, nor will I ever. I love movies too much to do something like that to one of them.” 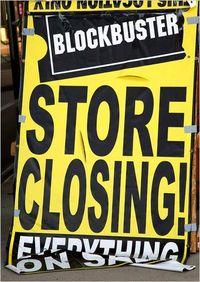 Dave Kehr recounts the ups and downs of video technology, noting, “streaming video seems like a return to the low-tech past.” Like DVD and Blu-Ray, streaming is a mixed bag as far as selection goes. “If you are interested, say, in exploring the work of John Ford, you can currently find only about a dozen of his more than 50 surviving features on Netflix, Hulu and Amazon Instant Video combined, all of them titles widely available since the VHS days.”

Because of the complexities of format conversions, video on demand services won’t grant every cinephile’s dream: access to every film ever made.

Facebook users seem generally unimpressed, although as of this writing no one has posted after using the service. Deana Pruitt writes, “Yesterday facebook started offering movie rentals that’s pretty cool it states 3 dollars a rental.. Think I’ll stick with the redboxes ;)” Jennifer Amlie complains, “$3.00 for an 48 hours movie rental through facebook? What are we going backwards here? i pay under $10.00 a month for Netflix and can stream thousands of things instantly with one flat fee. Seriously, how is this a threat to Netflix?”

Suppose we should have seen this coming… These are “dark” times for indie rental houses — no pun intended. Support your local indie rental joint aka us. A buck spent at Video Americain sends a message to the corporate giants that our love of film won’t be governed by robots!

No word, as yet, on when The Social Network will be available for rental on Facebook.