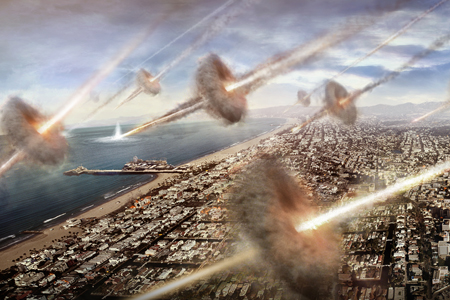 The West Coast of the United States awoke this morning to tsunami warnings and a new disaster movie set in the skies above them. With images of the earthquake and the tsunami coming in from Japan, the timing of the release of Battle: Los Angeles couldn’t have been worse.

But even before today’s earthquake struck, Battle: Los Angeles was irritating people. In The Atlantic Patricia Beauchamp wondered,

Why is it that L.A. looks best when it’s hosting an apocalypse and is seldom the backdrop for romance? With so many love stories set in Manhattan, and so few in Southern California, filmmakers appear to be sending a message: New York is the place to fall in love, but L.A. is the place to die.

In recent years, movies like Cloverfield and District 9 have used up-to-the-minute multimedia tropes (grainy whiplash shaky-cam, high-definition TV and Internet images) to turn fairly traditional monsters and aliens into something new. They’ve made it feel as if old-fashioned movie creatures were looming right up into our reality. It’s a catchy technique, but in the paramilitary alien-invasion head-cruncher Battle: Los Angeles, the digital-era clutter serves a different and much lower purpose: It’s basically there to cover up the fact that, except for the relentless, jittery way that the film has been photographed, there’s nothing of interest going on in it. It’s all fractious guerrilla-newsreel ”style” masquerading a void.

“Battle: Los Angeles” is noisy, violent, ugly and stupid. You want to cut it up to clean under your fingernails. http://bit.ly/fXdVfgless than a minute ago via SocialOomph

Which was all this guy needed to hear to make his weekend plans.

I love movies like “Battle: Los Angeles” because I love reading Roger Ebert’s reviews of them: http://bit.ly/fzOzavless than a minute ago via web

Also in the bad timing department, Vogue runs a profile of Asma al-Assad, the “glamorous, young, and very chic” wife of Bashar al-Assad, the dictator of Syria. In Vogue’s characteristically purring prose, Syria is described as

the safest country in the Middle East, possibly because, as the State Department’s Web site says, “the Syrian government conducts intense physical and electronic surveillance of both Syrian citizens and foreign visitors.”

Returning to the subject of the earthquake in Japan for a moment, there’s such a thing as the economics of Japanese earthquakes, even earthquake bonds.

VISIT FROM THE GOON SQUAD by Jennifer Egan wins #NBCC11 fiction award! Would have been my choice too. Loved it: http://ow.ly/4c7Icless than a minute ago via HootSuite

I never blogged on Egan’s novel, but I read it last summer and liked it very much, too. The novel comes out in paperback

in a few weeks.

has gotten generally rave reviews, although I’ve heard some people complain it can get vaporous at times. Vanity Fair talks to the Yugoslavian-born Obreht, one of the New Yorker’s 20 Under 40 authors. 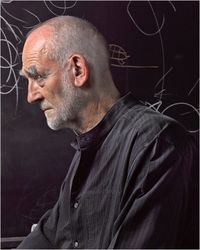 Michael Kimmelman has a long profile of the Pritzker Prize-winning Swiss architect Peter Zumthor, who appears at left in the great photo of him by Hendrik Kerstens. The monkish Zumthor confounds every image you’ve ever had about an architect.

Another confounding figure is the 16th-century essayist Michel de Montaigne, who is in vogue these days.  Sarah Bakewell just won the National Book Critics Circle Award for her biography of him, How to Live: Or A Life of Montaigne in One Question and Twenty Attempts at an Answer