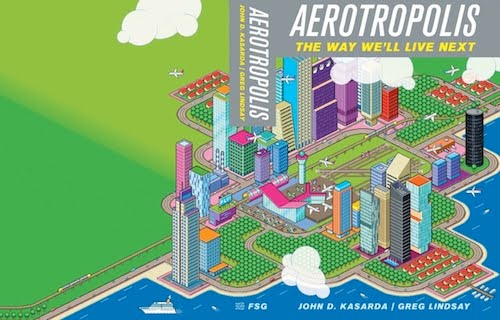 In their new book Aerotropolis: The Way We’ll Live Next

, John Kasarda and Greg Lindsay argue that the aerotropolis, or airport-city, is the model for “the way we’ll live next.” An airport, they argue, is a new kind of human settlement that “represents the logic of globalization made flesh in the form of cities.” Just as many nineteenth-century cities such as Chicago were formed by railroads, twenty-first-century “instant cities” are formed by global air travel. Cities will be mass produced in Asia and the Middle East. Geoff Manaugh of BLDGBLOG explains in his introduction to his interview with Greg Lindsay,

“Each [new city] will be built faster, better, and more cheaply than the ones that came before,” Aerotropolis suggests: whole cities created by the warehousing demands of international shipping firms. In fact, they are “cities that shipping and handling built,” Lindsay and Kasarda quip—urbanism in the age of Amazon Prime.

The world of the aerotropolis, then, is a world where “a metropolitan area’s position in the airline network determine[s] its employment growth and not, as commonly supposed, the other way around.” Or, as a representative from FedEx explains to Greg Lindsay, “Not every great city will be an aerotropolis, but those cities which are an aerotropolis will be great ones.”

In this exchange, Lindsay and Manaugh describe the aerotropolis as a kind of corporate city-state.

BLDGBLOG: In this context, you point out in the book that Kasarda “proposes building cities by corporations for corporations, guaranteeing their survival by tailoring them to clients’ specifications—beginning with the airport.” The city is not an expression of human culture, so to speak, but a kind of 3-dimensional graph of economic activity.

Lindsay: Yes, the aerotropolis—as Kasarda preaches it and as has been implemented in places like Dubai and elsewhere—is less about urbanity than repurposing the city as a “machine for living,” to quote Le Corbusier.

The aerotropolis is basically an economic engine. Planners are looking for ways to make these cities as frictionless as possible in terms of doing business—which means that, in places like Dubai, the tax-free zones and enclaves such as Dubai Media City and Dubai Internet City and the Jebel Ali Free Zone can basically wage an economic war of all against all when it comes to competing cities. They were designed as weapons for fighting trade wars, and their charter—to be duty-free and hyper-efficient—reflects this. So it’s interesting in the sense that these cities are infrastructure-as-weaponry, which Rem Koolhaas wrote about in “The Generic City”—“City X builds an airport to kill City Y.” They’re competing rather than complementing.

China’s cities, in particular, are building infrastructure not as a way to improve urban living across these larger regions, but basically so that they can do battle against one another for attention and investment.

At a certain level Aerotropolis is an updating of the concept of the generic city. And like Koolhaas’s essay, the line between description and prescription gets a little blurred, as this woman intuited.

*here’s* a horrible little dystopian urban model from a sadistic architect: http://t.co/zSJEWCXless than a minute ago via Twitter for Mac

Actually, the idea didn’t come from an architect. In fact, architects and architectural critics have largely panned the idea. Rob Holmes at the Mammoth blog says the aerotropolis is “more a symbol of globalization than it is the ultimate instantiation of globalization.” Kazys Varnelis of Columbia University points out that air travel and shipping won’t seem so frictionless once oil hits $150 a barrel.

The aerotropolis is the brain child of John Kasarda, a business professor. To be precise, Kasarda is the Kenan Distinguished Professor of Strategy and Entrepreneurship and Director of the Kenan Institute of Private Enterprise at the University of North Carolina’s Kenan-Flagler Business School.

An Aerotropolis sounds horrifying until you realize that they are already ubiquitous. BLDGBLOG: http://bit.ly/ihKzMJless than a minute ago via TweetMeme

What people are picking up on–without reading the book–is the apparently cheerful way Kasarda regards the new instant cities as collaborations between multi-national corporations and autocratic regimes. Is the aerotropolis a dreary post-urban vision or an excellent investment opportunity?

The concept of the aerotropolis originally made the rounds of business-oriented publications such as Fast Company. Chambers of Commerce have latched onto the idea. For instance, there’s the Detroit Region Aerotropolis, “America’s premier location for trade and business expansion.”

Detroit was a city built by and for auto companies. And look how Motor City turned out.