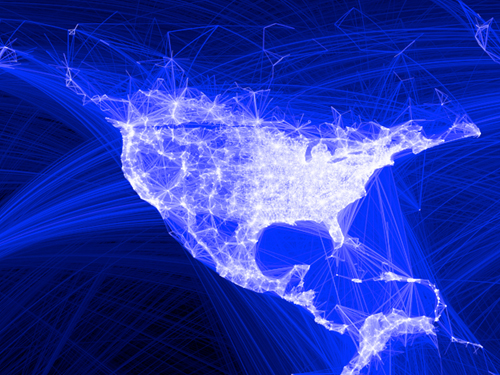 The Spring 2011 issue of MAS Context is NETWORK. In architectural terms, networks have two basic meanings, both mild challenges to the orthodoxies of the profession. “Network” refers to the idea that buildings bring people (or data, or traffic) together, that buildings aren’t standalone objects. Also, the term “network” is shorthand for “architects need to get out more.”

The unexpected heroes in the debate about networks and architecture are Le Corbusier and Mies van der Rohe, two paragons of the building-as-sacred-object school of thought. Ethel Baraona and Cesar Reyes interview Beatriz Colomina about how Le Corbusier and Mies used the media to promulgate the idea of the modern. She says,

Often people don’t even realize that the Mies we all know is basically produced through magazines and publications. His five famous projects (the two skyscrapers, the brick house, the concrete house, etc) are really paper architecture, produced within the context of some international exhibitions and are quite different from the projects he was building at the same time (the Mosler House, the Eichstaedt House) that were really conservative. All of the modern architects were involved in one way or another with the publishing industry. 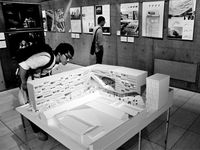 The division between “paper architecture” and built buildings, between structures and the commentary on those structures, breaks down in Modernist architecture. Jacques Derrida regarded architecture as a network of metaphors. Writing comes before, during, and after the design and construction of a building. The link between Modernism and writing is clarified in Ioanna Angelidou’s discussion of contemporary Japanese architecture. Le Corbusier was a major figure in twentieth-century Japanese architecture primarily because he wrote so much. His writings provided rhetorical ammunition for Japanese advocates of Modernist architecture. Later, in the post-real estate boom period, architecture magazines have been crucial venues for keeping design ideas alive when there are few buildings to construct.

For architect Akihisa Hirata, the media is a way for young architects to come out from behind their computers and engage with larger social issues.

Architecture in Japan is not really social. For instance, it is very rare to see architects’ comments in newspapers or other everyday media outside the profession, the one that common people have access to. Scientists reach out to a broader audience and make public appearances in Japan and I very much hope that eventually architecture will also gain such an audience and influence by its own means. I believe architecture is very much related to social issues and people’s everyday [lives], so why not have access to the media that refer to them?

The media is only one kind of network through which architecture comes to be defined. MAS Context editor Iker Gil interviews Sarah Rich and Nicola Twilley of the Foodprint project. Rich and Twilley see the city as a vast food distribution network. They are particularly interested in gaps within the network. Food deserts, for example, appear in sections of the city that are underserved by chain grocery stores who fear they can’t sustain profit margins there.

Wal-Mart is also interested in gaps in the commodity distribution network, and Wal-Mart isn’t afraid of anything. Jesse LeCavalier chronicles Wal-Mart’s siege of Vermont. The state refused to allow the chain in its territory, so Wal-Mart placed stores on in neighboring states (sales-tax free New Hampshire was a favorite) so that by the time Vermonters finally relented and allowed Wal-Mart in, the company already had most of the state covered. 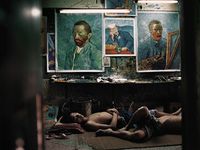 Networks, then, are a way of extending architecture across territories. Buildings can also pull together widely dispersed economic activities, giving them concrete form and plugging them into the global economy. Jiang Jun reports from Dafen, a village on the outskirts of Shenzhen Special Economic Zone in China. Dafen is a classic one-industry town, but with a specialization so narrow that it could only work by being connected to a global distribution network. The workers of Dafen are experts in hand-crafting copies of oil paintings. Photographer Haibo Yu depicts the workshops as scenes of bohemian squalor. The workers appear every bit as focused and exhausted as the artists who originally created the paintings.

In Dafen we also see the outer boundary of the architectural network. Workers are pulled from the undifferentiated masses of rural workers into a node within the vast network called “Made in China.” The juxtapositions Le Corbusier liked to create—an automobile placed before the Parthenon, for instance—come to life in Dafen’s juxtaposition of art and mass production, industrial force and the knowledge economy. As anyone who works with networks for any length of time knows, all kinds of strange and fascinating relationships appear deep in the network.