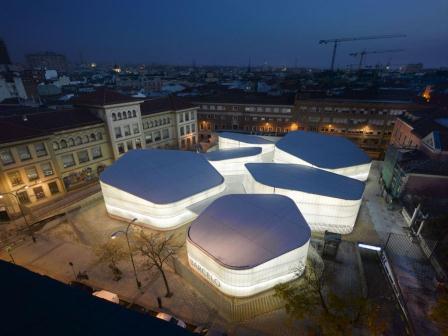 This has been a crazy week in One-Way Street land. Among other things, I received a new job offer. I start my new gig on April 8 managing the development of iPad apps. In the meantime, there’s lots of work to do transitioning from one job to another. Luckily, winter continues its grip on Chicago. The cold focuses the mind, as they say.

I will be working in downtown Chicago across the street from Helmut Jahn’s Thompson Center building. I’ll have a train commute for the first time in a while (currently I bike to work), so I’ll have reading time. I was looking forward to going to my local Borders until I noticed yesterday that they’re closing it. Author Bryan Charles asks, “Is it odd to mourn the closing of certain big-box stores?” His answer is ambivalent. “You could argue that Borders brought trouble on itself, that after years of outrageous expansion, partnering with Amazon, and failing to keep pace with the rise of e-readers, it deserves whatever it gets,” he writes, before adding that the chain brought his books to a wide audience. I’m ambivalent, too. I remember the great Borders on Rittenhouse Square in Philadelphia, which closed years ago. In the past few years I’ve had some frustrating experiences both in their stores and online. I’m sorry to see Borders go, but I gave up on them when they gave up on me as a reader.

One of the reasons why Borders is failing is because you can’t make any discoveries like the terrific architecture coming out of Spain right now. Next Wednesday is the opening of the Young Architects of Spain: A Window to the Unknown exhibit at the Instituto Cervantes in Chicago. Featured are sixty-two projects from Spanish architects under age 40. a generation of Spanish architects under age 40. The exhibit is a chance to see some representative work realized in Spain and across the globe.

I will be attending the exhibit’s opening lecture, “The Art of Building: A Conversation with Architects Fuensanta Nieto & Enrique Sobejano.” Nieto and Sobejano are partners in Nieto Sobejano Arquitectos. They also teach at the Universidad Europea de Madrid and Universität der Künste of Berlin. In 2010 Nieto and Sobejano won the Aga Khan Award for their Madinat al Zahra Museum in Cordoba, Spain. Their lecture begins at 6 PM on Wednesday, March 30 at the Instituto Cervantes.

Coming next week to this space: A review of the new novel by James Boice and a feature on Detroit.