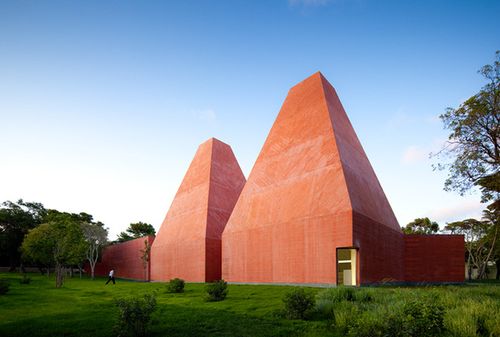 The Portuguese architect Eduardo Souto de Moura has won the 2011 Pritzker Award, the architectural equivalent of the Nobel Prize. Evidently there was some confusion about the announcement. A Spanish news organization originally broke the story before the official announcement. Word has spread quickly.

So pleased that Souto de Moura has won the Pritzker. I love the way he is on the floor above Siza’s, and they have lunch together.less than a minute ago via TweetDeck

Edward Lifson has a good story on NPR on Souto de Moura.

Like Peter Zumthor and Alvaro Siza, Souto de Moura is something of an architect’s architect: widely admired by his colleagues but largely unknown outside architectural circles. His best-known buildings are in Portugal. They include a stadium in Braga, Portugal, an office tower in his hometown of Porto, and the Paulo Regio Museum in Cascais, Portugal (top). The Pritzker jury was also quite taken with his House No. 2 in Bom Jesus, Portugal (below). 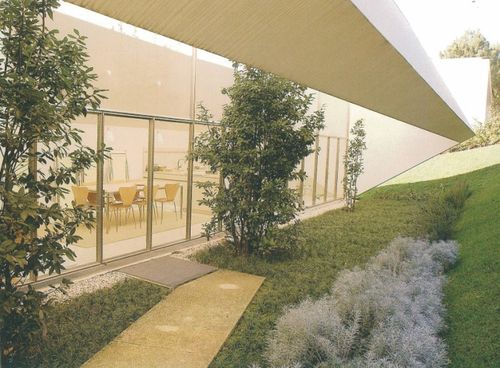 Souto de Moura began his career with Siza’s firm. Together they are credited with transforming Portuguese domestic architecture. Here’s a 2007 Dwell article:

It was Souto de Moura and Siza who reintroduced drystone walls to the architecture of the Iberian peninsula, and created a modernism that was rooted in the materials and topography of Portugal. . . Souto de Moura’s seminal Casa Bom Jesus superimposes concrete on stone and makes nature a place of human habitation. [Italics mine]

It’s common to claim that architects from smaller and/or non-Western countries adapt modernism to local conditions. In literature, there’s a concept known as minor literature, which means literature written in a major language but in a small nation. Franz Kafka, a Czech who wrote in German, is the most famous example. Souto de Moura practices a minor architecture in that he uses the international language of Modernism to create a Portuguese architecture.

The theme of bringing nature into social space is commonly applied to Souto de Moura’s work. The Casa das Histórias, a museum dedicated to the work of a single artist, Paula Rego, has been described as having a “yin-yang configuration of mineral versus vegetal.” Like a lot of contemporary architecture, the Casa das Histórias was designed to be photographed.

Even his soccer stadium in Braga unites the natural and the Modernist. 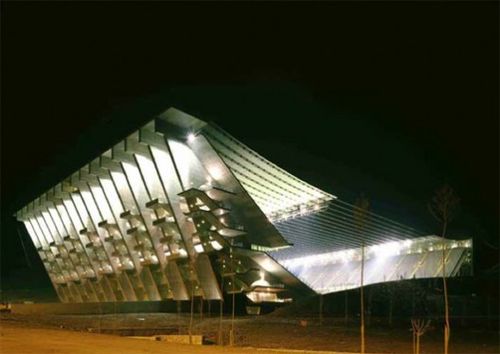 His stadium in Braga, Portugal was the site of European soccer championships when it was completed in 2004, and gained high praise. Nearly a million and a half cubic yards of granite were blasted from the site and crushed to make concrete for the stadium. Precise explosions of a mountain side created a hundred foot high granite face that terminates one end of the stadium. Souto de Moura describes this coexistence of the natural with the man made construction as good architecture. In his own words, “It was a drama to break down the mountain and make concrete from the stone.” The jury citation calls this work, “…muscular, monumental and very much at home within its powerful landscape.”

In interviews Souto de Moura acknowledges that he works to combine the “nature and the man-made.” At times he sees a pre-existing continuity between the two, stating

being non-natural is not necessarily being against nature. The relationship between the natural and the non- natural should be a natural one; there must be an empathy between the two for both to coexist in harmony. If the relationship is not harmonious, the architecture is not sustainable.

Sometimes, though, architecture needs to defy the laws of nature.

we are challenging gravity. The aesthetics of modern architecture begins with imitation of the machine. And machines imitate nature. Man invents machines to perform tasks nature cannot easily do: to make things easier, to move water faster, to have better light. So during the Industrial Revolution modern architecture emerged, led by Le Corbusier’s concept of the house as a “machine for living.” Materials and mechanisms were then developed that seemingly liberated buil- dings from the force of gravity. Hence the option of floating.