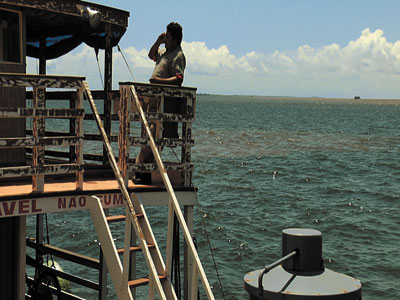 Augusto Contento’s film Strade d’Acqua (Roads of Water, 2009) was screened at the Chicago Cultural Center earlier this month. The film is a feature-length documentary about the current political, economic, and social conditions on the Amazon River. Contento stages a series of interviews on a boat traveling along the river, with interludes of languorous tracking shot sequences showing the partly denuded riverside landscape, with jazz musician Ken Vandermark’s punchy soundtrack contrasting with the often dreamy mood of the images.

The interview subject are a variety of people associated in one way or another with life on the Amazon. An archeologist claims that even the native tribes never lived in harmony with nature, but they did increase the biodiversity of the region. A social worker discusses widespread drug use among inhabitants of the river basin. A factory worker reports on the appalling conditions at a Manaus stereo speaker factory. An architect complains that the city of Manaus was designed like a nineteenth-century European city in utter disregard for the location deep in the rainforest. A young woman tells the story of moving from her native village to Manaus, recounting how she it took her half an hour to work up the courage to enter a revolving door for the first time.

Contento keeps his camera fixed on his interview subjects as the riverbank passes from right to left. We see no people in the background, no animal life except for an occasional bird. For all the vivid immediacy of the interview sequences, the subjects seem to be talking about a distant time and place.

As often as he can Contento composes his shots in broad horizontals. One of his favorite compositions is a long shot of people sleeping in hammocks. Another is another long shot of stevedores unloading boats by tossing parcels from one to the other. we gaze upon a lovely but inscrutable landscape. Nature appears static. Only the camera moves.

One of the criticisms of this type of mise-en-scene is that it aestheticizes the experiences of the working classes. We learn nothing about how the dockworkers feel about their work or each other. Real social relations are rendered as abstract formal relations.

Other panorama documentaries have been accused of aestheticizing experiences. Sigfried Kracauer brought this charge against Walter Ruttmann’s Berlin, Symphony of a Great City. What rescues Strade d’Acqua from aestheticism is the contrast between the beauty of Contento’s image composition and the despair of the interview subjects. They relay a litany of complaints, and yet we’re reminded that no one belongs there. “Humans never lived in harmony with nature in the Amazon,” the archaeologist says. The region is not only a lost paradise, but a paradise lost over and over again. The interludes between the interviews make it seem like life has continued unchanged since before the jungle appeared.

When the film finally arrives at the city of Manaus, the entire way of life portrayed in Contento’s elegant tracking shots seems imperiled. Manaus appears sinister and ugly. The city embodies virtually all of the oppositions that define the Amazon basin: urban vs. rural, nature vs. culture, pre-modern vs. modern, native vs. European, Brazil vs. the global economy, dreams vs. reality.

Strade d’Acqua is a rarity: a stylish talking heads documentary. Like a lot of interview documentaries, the film doesn’t have much dramatic tension. The sequences flow one after another, without conveying much sense of how long they will go on. The lack of temporal mileposts is consistent with the film’s theme, of course, but it requires some adjustment on the viewer’s part. The reward is an extended gaze into a fascinating, and perishable, part of the world still obscured in myth.