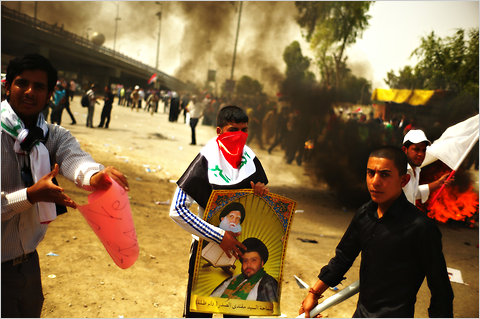 Tim Arango, a New York Times reporter in Iraq, pays a visit to a photography exhibit curated by the political organization tied to Moktada al-Sadr, the erstwhile anti-American cleric and general purpose rabble rouser. The exhibition, located in the lobby of the Iraqi Parliament, is apparently intended “to make a moral argument for the Americans to leave,” Arango writes.

But the photographs themselves are both crudely polemical and ambiguous. The photographs express a wish for something without uttering the wish out loud for fear it could come true. For example, one photograph shows an Iraqi boy, a double amputee, on a bed, but there’s no caption explaining how the boy was injured. Al Qaeda? A Shiite militia? The U.S. Army? Who knows.

This isn’t 2006 any more, and the exhibit isn’t a full-throated condemnation of the U.S. One mitigating factor is that al-Sadr has some political problems he has to attend to, and anti-Americanism doesn’t have the currency it once did. There are suggestions that al-Sadr can’t mobilize the disaffected masses like he used to, and his organization’s demands for a complete American withdrawal at the end of 2011 (it’s on the calendar) may not sit well even with the Iraqis, who aren’t so sure their security forces are ready to go it alone.

Still, al-Sadr has given the government of Prime Minister Nuri Kamal al-Maliki six months to fix up the nation’s dreadful infrastructure before the protests that rocked the capital resume, and the al-Maliki government could be the next to meet a violent end. If that happens, then it will be easier–and harder–to demand a U.S. troop withdrawal.