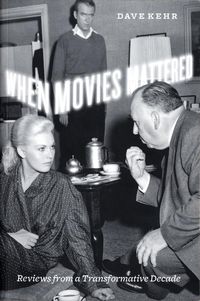 J.R. Jones of the Chicago Reader introduces the world to Dave Kehr, the weekly’s first staff film critic. The irony of the introduction is that Kehr is one of the deans of contemporary American film criticism. His self-effacing style makes him something of an enigma, especially when most critics, famous and not so famous, generally have a distinct style and approach. A.O. Scott is the best major critic on Hollywood film and current American culture, Richard Brody is the keenest critic on European film, Anthony Lane is perhaps the best writer of major American film critics, Gilberto Perez is the best post-critical theory critic, and David Bordwell understands film technique better than anyone. No one writing for mass publication is better at film history than Dave Kehr.

Kehr is best read as a teacher. Jones writes,

I wouldn’t be exaggerating much to say that Kehr was my film studies teacher. As a college student in the early 80s and a young wage slave in the city afterward, I picked up theReader every chance I could get, and his work was a revelation to someone who’d been reared on movie reviews in Time magazine and the Chicago dailies. Here was movie writing so acute, intelligent, committed, and beautiful that one could, with a straight face, actually call it literature.

I had almost exactly the same experience, in the same place at the same time. (As far as I know, I never met Jones.) Kehr was one of several teachers I had during that time. Siskel and Ebert dominated Chicago film criticism then. Kehr was the model for a serious film critic writing for a popular daily. He was a bridge between thumbs up/thumbs down and The Imaginary Signifier

Kehr’s new book is When Movies Mattered: Reviews from a Transformative Decade

. Kehr examines a broad swath of film history, covering everything from high modernism to Hollywood melodramas to Poverty Row crime movies. His enthusiasms are broad without ever being pedantic. At a time when critics in blogs have bifercated into high and popular culture and periodical critics have too often assumed phony regular guy poses in order to keep their readers, Kehr is a throwback in the best sense: someone who loves all movies.