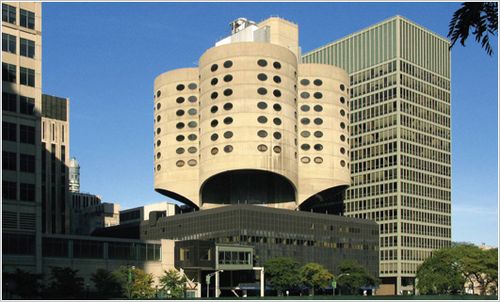 Perhaps the most lively building preservation fight going on in the U.S. right now is the effort to preserve the  former Prentice Women’s Hospital in Chicago. The building was designed by Bertrand Goldberg, who also designed Marina City along the Chicago River.  Northwestern University, the owner of the building, moved Prentice to a new building nearby and announced plans to demolish the Goldberg building, completed in 1974.

Goldberg’s structure was considered an innovative engineering design at the time. The clover leaf-shaped shell at Prentice is cantilevered out from a central core, thus eliminating any supporting columns in the lower building and providing a column free space in the tower, allowing more planning flexibility. Promotional materials from Goldberg’s firm proclaimed,

the breakthrough design for the seven story bed-tower is new in every respect. New in nursing care: patients are gathered in four small groups on each floor, each group with a nursing center, to provide better attention for the patient and fewer steps for the nurse and doctor.

I can attest to the unusual, and very un-institutional intimacy of the delivery room layout. My son was born at Prentice in 2004. We spent 17 hours in the delivery room (it was a normal but slow birth), so I got to know it very well. At the moment of birth the delivery team arrived so quickly it seemed as if they dropped in from the ceiling. However, beyond the delivery rooms the facility was shabby and careworn. Clearly the building wasn’t well suited to contemporary medical technology. Furthermore, since 1974 a number of highrises had been erected around the medical school campus, making Goldberg’s elegant forms difficult to see clearly.  Even in its neglected state, however, it’s a distinctive building, totally unlike any other hospital I’ve ever been in. 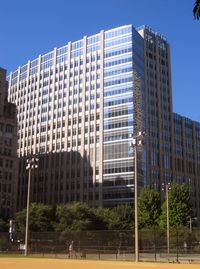 The new Prentice building is state of the art, but it’s utterly conventional and boring, like most of the NU medical center campus. This building could have been built anywhere. Chicago Tribune architecture critic Blair Kamin called the 2007 building “aesthetically banal.”

The university seems entirely satisfied by the new Prentice, and the medical school is eager to tear down the old Prentice to make way for a research building. Northwestern has a lot of political clout in Chicago, and the school generally gets what it wants.

Nevertheless, opposition to the university’s plans formed so swiftly that the  local alderman, Brendan Reilly, persuaded the university to postpone its application for a destruction permit 60 days, although the adlerman hasn’t said he’s against the demolition.

Edward Lifson’s outrage is representative of opponents to the destruction of the Goldberg towers.

Seems to me if you could find someone – even today – to design a building, a place, a monument to maternity, so forward-thinking, so interesting, profoundly smart, honest, daring, ambitious and enlivening, that you’d be grateful. If you could find the money to build it without watering it down, straightening out the curves, oversimplifying it in every way, you’d be proud.

Well, this building already exists in Chicago, a city lucky to have its legacy, but, as often, destroying greatness for mediocrity. Shame on Northwestern University for planning to tear it down.

The paradox of the city’s relationship with its architectural history is that people here love to refer to Chicago as one of the great architectural cities of the world, yet the city has a poor record for preserving significant structures in the city. Preservationists are still stinging over the destruction of the Walter Gropius-designed buildings at Michael Reese Hospital.

Several reuse proposals were made for the Gropius buildings–at that time the city was still under the delusion it had a chance to land the 2016 Olympic Games–to no avail. Landmark Illinois, though, is trying the same tactic for the Goldberg tower. One reason why the preservationist group is advancing a reuse proposal is that Alderman Reilly said that was a pre-condition for his support.

Another possibility is to designate the old Prentice as an official city landmark. That would require the support of the incoming mayor Rahm Emanuel, who takes office May 16. So far Emanuel hasn’t made any public statements about Prentice. It’s too soon for reaction to coalesce around the Landmark Illinois proposal.

Regardless of what happens to the old Prentice hospital, it’s hard to image anything like it will ever be built again.