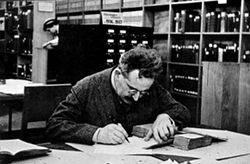 At one point as I was writing my doctoral dissertation on Walter Benjamin’s Arcades Project I jokingly suggested to my dissertation advisor that I should leave the project unfinished, just like the Arcades Project itself. “Ah, the mimetic fallacy!” he responded. That ended the conversation. His point was clear: just because one imitates something doesn’t mean one can reproduce it.

That fallacy seems to be at work in Kenneth Goldsmith’s fascinating yet perplexing attempt to rewrite the Arcades Project as an exploration of New York City in the twentieth century instead of Paris in the nineteenth century. He explains,

The idea is to use Benjamin’s identical methodology in order to write a poetic history of New York City in the twentieth century, just as Benjamin did with Paris in the nineteenth. Thus, I have taken each of his original chapter headings (convolutes) and, reading through the entire corpus of literature written about NYC in the twentieth century, I have taken notes and selected what I consider to be the most relevant and interesting parts, sorting them into sheaves identical to Benjamin’s.

I’ve tried to maintain as perfect as possible a mirror of Benjamin’s project.

Goldsmith can’t copy it exactly. He has to find substitutes for some of the major figures in Benjamin’s work. Baron Haussmann becomes Robert Moses, an inspired choice. Goldsmith substitutes Robert Mapplethorpe for Charles Baudelaire, which makes sense at the level of a poète maudit. However, to my mind Mapplethorpe’s work isn’t rich or varied enough to carry the conceptual weight Benjamin placed upon Baudelaire. Andy Warhol would have made a better twentieth-century Baudelaire.

Goldsmith also doesn’t seem to have a substitute for the Paris arcades, Benjamin’s “dialectical fairyland.” Benjamin regarded the arcades as the origin of capitalist culture, the “hollow mold out of which the modern was cast.” In Goldsmith’s admittedly brief account of his own project, I don’t see an equivalent central image. He wants to “read through and describe the magnitude and complexity of the New York City in the twentieth century.” By comparison, Benjamin’s intent was radically reductionist, even as his notes proliferated. He never would have been satisfied with simply representing complexity.

Another problem with rewriting the Arcades Project is defining it. Goldsmith reports he’s written 500 pages so far, “approximately half way to the 1000+ pages that constitutes Benjamin’s book.” Except that there’s no such thing as “Benjamin’s book”–never mind the differences between the Harvard English translation and the German edition as volume 5 of Benjamin’s Gesammelte Schriften. Everyone agrees that the Arcades Project is the collection of roughly 10,000 notes Benjamin took during his reading in the Bibliothèque nationale de France. However, the notes–not all of them quotations, by the way–were never intended to be ends in themselves. Benjamin made a number of attempts to bring his material into publishable form, including the two precises he produced for Theodor Adorno and the Frankfort Institute. There are also notes Benjamin took as he worked on the essays, as well as his correspondence with Adorno and others. In one letter Adorno shot down Benjamin’s proposal to publish the Arcades Project as a montage of quotations, which is what Goldsmith intends to create.

I once contemplated rewriting the Arcades Project, but I dismissed the idea as unworkable. Nevertheless, Benjamin’s example is an alluring one, and I haven’t completely given up on adapting his representational methodology for a project. I wish Goldsmith luck in his endeavor. He’s taken on a huge task. The results will certainly be interesting. They just may not be Benjaminian.