Another frantically busy week for me. I’m working 12 to 14 hour days. I’m hoping things will settle down soon so I can resume a more frequent blogging schedule.

Regular readers know that Fun Friday is my regular (usually) feature on interesting things to do, read, watch, listen to–whatever.

If you live in Florida, this piece of news may or may not change your weekend plans. The lede says it all: “Floridians are going to have to start pulling up their pants and stop having sex with animals soon.”

Which reminds me The Beaver goes into general release this week. When it debuted at the SXSW film festival it took a lot of people by surprise and lots of snark ensured. By now critics are better prepared, so they’re seeing substantial–compared to Thor, anyway. Manohla Dargis describes Jodie Foster’s film as a standard family melodrama, then goes on to suggest that the family would have been happier if Mel Gibson’s character had been institutionalized. That way, “Gibson would still be able to deliver a gesturally and vocally persuasive performance as the man with two heads, one meat and one cloth.” Roger Ebert also grudgingly admires Gibson’s performance, but he can’t suspend disbelief as often as the film demands. For instance, he doubts Matt Lauer would interview a guy with a beaver puppet on the real Today show. I would venture to guess that Matt Lauer would interview an actual beaver on live TV without blinking an eye, but Ebert’s point is taken.

The consensus seems to be that it’s a conventional melodrama with a peculiar premise, but it’s hard to look beyond Mel Gibson with a beaver puppet. Adding Jodie Foster to the mix makes matters worse. Roland Barthes couldn’t sort through the layers of weirdness.

“Was it Mel who made those phone calls, or the puppet?” @andohehir reviews “The Beaver.” http://shar.es/HvLlzless than a minute ago via web 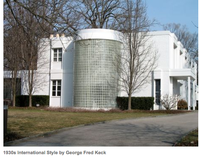 According to this short film, in the future there won’t be much room for architect-designed single-family houses. Everyone’s daily lives will be controlled by a computer and everyone will be a vegetarian. (I’m not sure which is more scary.)

Megacities on the move – Planned-opolis from Forum for the Future on Vimeo.

Currently I’m reading Al Gore’s Our Choice, his 2007 book updated for the iPad and the iPhone. In this version he addresses the global warming deniers with his trademark sternness, comparing them to birthers.

I’m reading the iPad version, and it’s the best e-book I’ve seen so far. The app’s undeniable coolness factor clashes a bit with Gore’s wooden Indian style and there’s an extra twinge of guilt in enjoying the beauty of the images of environmental catastrophe. Features like interactive graphs make the scientific details much more memorable. Now I know the difference betwen carbon dioxide and methane. There are bits of alarming data here and there; ten percent of the methane in the atmosphere comes from rice farming. I thought most of the methane came from fossil fuels and cow flatulence. I never would have dreamed rice could pollute. I guess I’m happy to know that now.