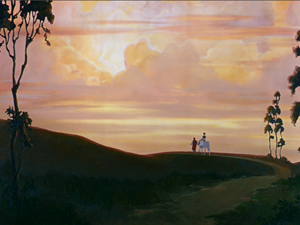 Watching the film with the little girl was her father’s friend, David Bordwell, the eminent film scholar. Bordwell asked an interesting question, one that would only occur to a film studies person: How did the little girl know the story was ending? In a blog post called “Molly wanted more” he started to think about how classical-style movies start to tell stories and how they end them. 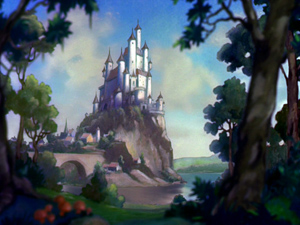 What he noticed was that films commonly begin by progressively moving into a story space. Snow White, for instance, begins with an extreme long shot of the Queen’s castle, then, in a three-shot sequence, to the Queen reflected in her mirror.

In the same way, films often end with a withdrawal from story space and its characters. Silence of the Lambs ends with the camera leaving Clarice Starling and Hannibal Lecter moving away from the camera and disappearing into a crowd.

Bordwell postulates that Molly recognized a pattern in Snow White that exists in social encounters. We enter and leave encounters with others, and so the camera does the same.

The entry/ leave-taking pattern mimics our activities as perceiving, socially inclined people. For creatures like us, to encounter a new situation or setting simply involves approaching it or letting it approach us, then becoming part of it and fixing our attention on its details. At a party, we amble closer to a knot of people we want to talk with, or someone comes up to us. Sooner or later that encounter ends or trails off, and we withdraw or turn away or watch when others depart. More poignantly, the extreme long-shot option can recall moments when a car or bus or train carried us away from our loved ones. In any case, thanks to moving images the salient features of this very common experience can be made tangible for viewers.

, yet she was able to perceive a common social pattern in Snow White.

Bordwell suggests that there more cinematic forms may be grounded in social practice, that not all aesthetic forms are entirely artificial. One immediate response would be to caution against removing aesthetic forms from history and making them somehow natural. Another possibility is that Molly wasn’t reacting to the loss of the characters, but to the disappearance of the image of her object of desire, Snow White, the first Disney princess. Her call of “more!” could have been her own fort/da game. In other words, the experience had more to do with the girl’s increasingly more sophisticated encounter with language, not other people.

In any case, Bordwell hopes to investigate the issue more. The results should be highly interesting.