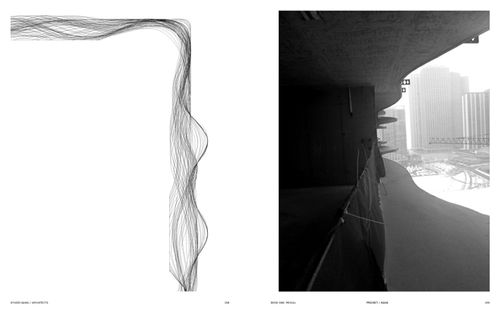 is the title of the new monograph by Jeanne Gang, the principal of Studio Gang Associates, the Chicago architecture firm responsible for the Aqua Tower, among the best new high rises recently erected in the United States. The title reflects the firm’s approach to designing and constructing a building. Ordinarily a building design begins with a vision. Mies van der Rohe used to sketch out his ideas obsessively as he refined his vision of what his buildings should look like. Gang approaches a project as an investigation into the site, the client, the environment–all the systems, seen and unseen, that influence a project and may be impacted by the finished structure. 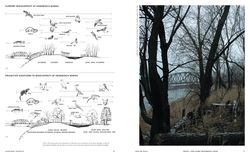 The best example of Studio Gang’s architectural investigations is the Ford Calumet Environmental Center. The building site is a marsh surrounded by abandoned steel mills on Chicago’s south side. The steel industry was once a mighty engine of the American economy, but the industry was run by slobs. They dumped all kinds of junk into the marshes. For birds, however, the marsh might as well be the Everglades. Dozens of different bird species use the marsh as a resting point on their migration path.

Gang mapped out the migratory path, which passes right over the center of the city. Very few Chicagoans are aware that the skyscrapers directly north of the site stand in the way of the migrating birds. Night flying over Chicago’s airspace is particularly hazardous; skyscrapers thrust themselves into the birds’ flight paths, and building lights disorient the birds, causing untold casualties. To drive the point home, Gang includes a gruesome two-page photo spread of bird carcasses.

Not only does Gang reveal the mass migrations passing over the heads of nearly three million city residents, but her team goes to the trouble of tracking down the names of the industrial refuse they discover at the site. Once these materials have been named, they can be seen, and then used. The architects later incorporated the discarded material into the design of the Calumet Environmental Center itself–exactly like a bird would build its nest. 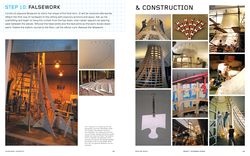 Most of Gang’s investigations end up with materials. The most exhaustive and enthusiastic study of materials took place in a project for the International Masonry Institute and the National Building Museum. She provides a “Step By Step Guide to Making a Marble Curtain.” Before you attempt to build one yourself, you should know there are ten steps involved in creating a 680-piece, 2,000 pound marble curtain–all of them maddeningly complex. The result, however, is a thing of unexpected beauty. The project confirms Gang as a tactile, artisanal architect in the manner of Renzo Piano, although without the Italian architect’s refinement. Gang knows when to push a material to its outer limit, as in the case of the marble curtain, and when to leave it alone, such as when she made sure that a concrete wall for a childcare center showed all the strata of the different types of donated concrete.

Studio Gang’s hands-on approach extends to all levels of the practice. Gang’s partner Mark Schendel demonstrates why it’s important for architects to create their own hand-made models. The laser-cut models produced from CAD designs can be “dull” and “boring” and “ugly, but not in an instructive way.” Bond paper, on the other hand, is “the most amazing modeling material there is.”

In the handful of photographs of Studio Gang at work, they are always making something, never sitting before a computer. They do more than just tinker with models and material samples. They also delve into the social and historical contexts of their buildings. These efforts are represented in broadsheet inserts concluding each section of the book. Each broadsheet is a miniature history lesson relating to the project. The broadsheets fold out, one of several clever features devised by the book’s designer, Elizabeth Azen. One of the best tells the story of the lighthouses in Plymouth, England. The original lighthouse was swept away to sea in 1703, carrying away its architect with it, but the second, completed in 1759, still stands. The only broadsheet that doesn’t succeed is a story about murder in the backwoods of South Carolina. It’s not clear what the story of is supposed to reveal about its project, a nature center in the Blue Ridge Mountains. The woods are full of villainous moonshiners? That nature without architecture, without form, drives people a little crazy?

Reveal gets a little unfocused toward the end, a perhaps inevitable consequence of Gang’s mapie approach. Each project is a little drama of exploration, with Gang serving more as a guide than an author. There are no traces of the architect’s genius, like Daniel Libeskind’s napkin sketches or Santiago Calatrava’s watercolor sketches. Instead, Reveal contains all the stuff that’s usually thrown away after a project is complete. “Architecture is a practice of amnesia,” Gang writes. In Reveal she gathers all the sketches, essays, and early notes from early in her projects, when meaning has not yet been finalized.