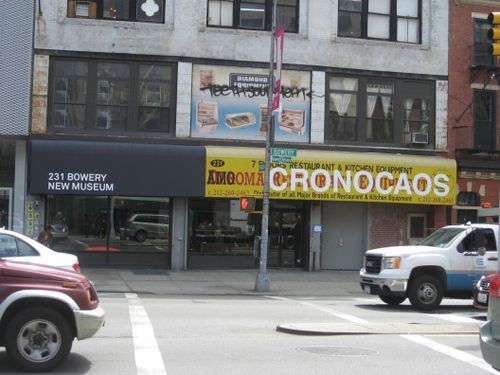 Rem Koolhaas and Shohei Shigematsu are staging at exhibit at the New Museum in New York–or rather, staging it in an old restaurant supply store next to the New Museum. Cronocaos is a polemic against preservationism that erases the most difficult and challenging periods of history while displacing the poor and the powerless to make way for gentrification and tourism.

This argument isn’t new idea. Koolhaas has refashioned it for his campaign against what he regards as outdated modes of urbanism. His dramatizes his point most effectively by rehabbing one half of the restaurant supply store, leaving the other half its old, crappy self. Nicolai Ourousoff, for one, was impressed:

The result is startling. The uneven, patched-up floors and soiled walls of the old space look vibrant and alive; the new space looks sterile, an illustration of how even the minimalist renovations favored by art galleries today, which often are promoted as ways of preserving a building’s character, can cleanse it of historical meaning. (To sharpen the contrast further, Mr. Koolhaas scattered a few beat-up tables and chairs, salvaged when CBGB was closed five years ago, throughout the room.)

The grubby old supply store seems vibrant and alive–as historical–only by virtue of its contrast with the musuem space marked by all the generic symbols of high culture. Without a New Museum exhibit by one of the world’s most famous architects dropped into it, the empty supply store is a null space hovering between repetition and infill, between yet another low-margin retail business and a new struture. Also at work is Koolhaas’s old surrealist genius, imbuing old everyday objects with barely recognizable yet somehow loaded meanings.

One can agree with Koolhaas’s position on preservationism yet still be pleased to see the store building gutted and rehabbed to its “original” state, which I’m betting wasn’t as a restaurant supply store. Whose history is being preserved in the supply store as it is now?

More provacative, however, is Koolhaas’s remarks on the destruction of Modernist buildings from the 1960s and 1970s. Often these buildings are being destroyed for ideological rather than aesthetic reasons. The pressures to demolish the Boston City Hall or Prentice Women’s Hospital in Chicago isn’t an attack on an outmoded aesthetic, but on the idea of architecture itself.