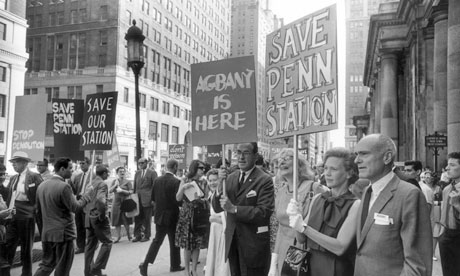 This year is the 50th anniversary of Jane Jacobs’s The Death and Life of American Cities. All great books of urban planning speak to a fantasy of what a city should be like, and Jacobs’s book is the twentieth century’s most beguiling fantasy of urban life. Her book stands between Ebenezer Howard’s garden city movement, with its vision of a city of white-washed bricks and bumble bees, and Le Corbusier’s pristine geometries extending all the way to the horizon. Like any good heroine, Jacobs had a nemesis: Robert Moses, who was crazy for highways. He wanted to run one through Greenwich Village, where Jane Jacobs, housewife and part-time architectural journalist, resided. Jacobs first parry against Moses was a book. Jacobs’s riposte to Moses’ hard-charging modernity was defiantly antique. Hers was an eighteenth-century market day urbanism: short blocks of mixed-use buildings, plenty of sidewalk traffic, small parks no more than a short stroll away. The rich would be chastened, the poor would become hipsters. Donald Trump would be banished to Dubai.

Fifty years later the benefits and drawbacks to Jacob’s urbanism have become clear. A Greenwich Village liberal, Jacobs was convinced that preserving older buildings would invariably help the working classes, as if they had to stay close to the ground to thrive. This wasn’t entirely naive; Moses’s slashing highways were meant to reduce the commuting time from the rapidly expanding suburbs. However, in practice the intimate neighborhoods for which Jacobs advocated became fertile grounds for gentrification, pushing the colorful working classes out to New Jersey. Over the years Jacobs’s brand of activism (that’s her protesting at left in the photo above) has made sure that lower-income people, with their pizza parlors and nail salons, stay away. Twenty-first-century cities can only buy lovely low-density neighborhoods by allowing high density elsewhere. Central Paris has remained a low-density urban paradise by building towers on the city’s fringes, out of the way of tourists’ cameras.

Still, Jacobs got a lot right. She understood that separating vehicular and pedestrian traffic–a popular safety measure in her day–would actually make the roads less safe. Manageable density and viable public spaces were essential to nurturing creative capital and democracy. The forces she fought–free market fanaticism and indifferent bureaucracies–are still with us today in intensified form, especially the former. Jacobs taught urban planners and architects to lighten up on the social engineering, although she wasn’t entirely free of it herself.

Jane Jacobs is arguably the most important urban theorist of the twentieth century, for she was the first person to argue cogently that urban decline wasn’t inevitable, that American cities could rejuvenate themselves by allowing ordinary people to live ordinary lives.