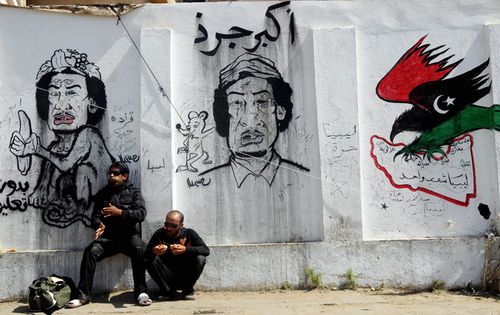 I’ve always had mixed feelings about graffiti: most of it is vandalism, some of it is witty, and a very small percentage is artful. However, graffiti is playing an important role in the Arab Spring uprisings.

Caricatures of the vilified leader and anti-regime or pro-democracy graffiti are popping up throughout the city centre and in recently trashed army bases, on building sites and on any suitable walls. There are posters of Gaddafi pumping petrol into a winged camel, Gaddafi with the tail of a snake and a forked tongue, Gaddafi as Dracula, Gaddafi as a clown, Gaddafi being bitten by a dog, Gaddafi getting a boot in the head. The variations are countless. Another popular theme is an often bloodstained Gaddafi terrorising or slaughtering his people or plundering the oil-rich nation’s wealth.

The photojournalist Wally Nell documented the role of graffiti in the Libyan uprising.

Qais al-Halali, one of the most active and prominent of the rebel graffiti artists, was shot to death, presumably by government security forces. Graffiti artists in Benghazi now operate under his name.

There are reports that graffiti is fueling the rebellion in Syria as well. The uprising in Dara’a was touched off when 15 kids, all under the age of 17, were arrested after they scrawled anti-regime graffiti on a wall in the town. 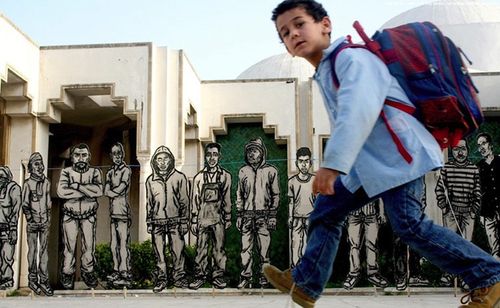 In Tunisia the Zoo Project has created a “martyrs series” of graffiti memorials for some of the 236 people killed in the January 2011 uprising.

Graffiti has long been an important form of expression in Arab uprisings. However, graffiti hasn’t always supported democratic causes. During the Great Arab Revolt of 1936-39 against British rule in Palestine, for example, some elements of the uprising were funded by the Nazi government, and swastikas appeared on walls across Palestine.