For this edition I want to sample some recent writings using Walter Benjamin to comment upon recent events and contemporary culture.

Greg J. Smith maintains the excellent blog Serial Consign, which looks at digital culture. Recently he published an essay, “Mediated Cityscapes 02: Memory and the City,” in which he talks about how the Arcades Project can help us understand cities and the data streams they emit, a topic of keen interest to me as well.

The Arcades Project is a key precedent for thinking about the passage of time and the city because it so capably leverages bits of granular content to delineate a broad range of interrelated social phenomena. Benjamin created a system that demands a data miner rather than a reader, and while this kind of media artifact was an anomaly at the time, it is now completely commonplace – look at how services like EveryBlock schematize news and events. A contemporary city dweller might use the new foursquare recommendation engine to find a restaurant to meet friends at for dinner, plot directions on a GPS device for the drive across town, use a RFID passcard to access a toll highway, dine under the watchful eye of a CCTV network and then upload geotagged photographs of the proceedings to flickr. In varying degrees, we are all now authoring these inventories of interactions across public and mediated space – this is before we even broach the topic of open municipal data and the transparency and the civic engagement it engenders. The generation and management of metadata and media libraries is now routine and this is the backdrop against which artists, designers and scholars develop tools to represent and call into question the nature of urban experience. Everyday ritual and ephemera, emergent narratives, archive-induced anxiety and the ubiquitous timestamp – the Arcades Project is practically a user manual for codifying personal and shared urban experience and tracking how the city changes over time.

Both the quoation and the link to the Benjamin Bardou video from “Mediated Cityscapes 02: Memory and the City“

Peter Thompson traces the history of how revolutions fail because their utopian impulses are diverted into consumption, where revolutionary energies are frittered away.

[i]n early Marx we find a desire for the naturalisation of man and the humanisation of nature but it is replaced by the sense that the constant desire to search for utopia has been transformed into a vicarious and consumerist attitude in which hope and utopia are to be found in the coffee shops where we can dream about unearned fame and lottery wins.

But maybe what we really want is just to find somewhere to rest after the long and tiring journey through the desert of history. Walter Benjamin maintained that this quest, even in its correct historical materialist form, always contains hidden within it a quasi-theological and messianic message of hope in which we, as the most social of all the apes, can find our place. The question is really why we are so modest. Why are we happy with our false utopias? Let’s go home. 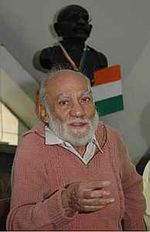 According to this obituary, the Indian playwright Badal Sircar (1925-2011) found a “new inflection of modernism” that superseded the urbane model Walter Benjamin popularized.

BADAL SIRCAR was the complete modernist in Indian theatre, carefully treading through the huge repertoire of devices realism brought to the 20th century stage and emerging on the other side and, at the same time, skirting the seductive richness of a vibrant people’s culture, which the urban intelligentsia was gradually discovering. Internationally speaking, the modernist had by then ceased to be the elegant flaneur, a slightly decadent stroller through the angst-ridden cityscape, celebrated by Walter Benjamin in his account of Baudelaire’s Paris. After the two World Wars of the 20th century, [Sircar] turned into a stalker in the 1950s, grimly moving through the aimless scuttle of unheroic creatures, all waiting for a whimpering end.

Catherine Feely, a PhD student in History at the University of Manchester, announced the launching of her new blog “misplacedhabits” with a quote from Benjamin’s “Berlin Childhood around 1900” about the power of things to evoke memories.

[e]veryone has encountered certain things which occasioned more lasting habits than other things. Through them, each person developed those capabilities which helped to determine the course of his life. And because—so far as my own life is concerned—it was reading and writing that were decisive, none of the things that surrounded me in my early years arouses greater longing than the reading box.

Feely then turns to a small pot she inherited from her grandmother, who used it to store jewlry. The pot is completely ordinary, and as such it poses a problem for historians.

My Nana’s pot is bound up with my memory. It is not just an object, but a dynamic link with a moment, or many moments, of my own past. It is people, experience, time and emotion. Benjamin longed for a past that couldn’t be fully recovered without access to the reading box. But we, as historians, are faced with the opposite problem: we have access to the reading box, or whatever our sources happen to be, but not to the memories attached to it. They have survived, but can we really gain any sense of what they ‘meant’ to the people that have owned or used them? Or are we attempting the impossible in trying to recover a dynamic experience that has been and gone and is no more? Is there ‘no more learning to walk’?

From “My Nana and Walter Benjamin, Or the Movement of Things“

And, finally, this quote from Walter Benjamin, submitted by a reader: