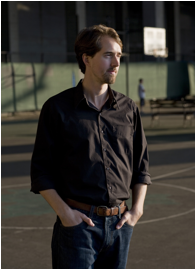 James Boice’s third novel, The Good and the Ghastly

, comes out today. The novel is set in the same northern Virginia suburbs as his previous novel, NoVA. However, a lot has changed since his last novel–a catastrophic nuclear war, for one. The Good and the Ghastly is set a thousand years in the future, when the world has rebuild itself in a rough semblance of what it was before the war.

As a result of the war, large chunks of what’s known as the Second United States have been bitten off. Arkansas has oceanside resorts, while Oregon exists only as a myth. The nation has been rebuilt with the same historical imagination as a suburban housing development, carefully reproducing the details while remaining blithely ignorant of how they fit together. A major tourist attraction in Walmart, Ohio is huge statue of a cat named Garfield from the Information Revolution Era (i.e., the present day). According to the tourist guide, humans were sacrificed to the giant orange cat in a Christian ritual.

The Visa Nuclear War, as the apocalypse is known, not only destroyed America’s history and landscape, it also erased all its brand names except one. In one of Boice’s most ingenious conceits, all consumer goods either have flatly descriptive names (Bar With Pool Tables, Big Luxury Car) or they carry the Visa brand (Visa Indiana, The Visa New York Arts and Politics Magazine). The effect is oddly unsettling. It’s like reading about a person who has inherited the house and belongings of a lunatic uncle then goes shopping at Wal-Mart for things that will keep the madness at bay.

Into this dispirited, bewildered world steps Junior Alvarez, fresh from a stint in juvenile prison. He does what any orphan with a felony conviction would do: he forms a street gang to defend a small, insignificant piece of Centreville, VA, his home town. Junior and his friends remain fiercely loyal to NoVA, even though the region has betrayed itself by turning into Newark. Junior is determined to become make something of himself, but he’s caught in the delusions of grandeur and despair endemic to a world with no outside.

Junior runs roughshod over everyone in NoVA who gets in his way, including a mob boss named Uncle Antonio who takes the young hoodlum under his wing and becomes a father figure. After serving an apprenticeship Junior kills Uncle Antonio and becomes an even bigger crime boss, eventually rising to the second spot on the Visa FBI’s top 10 most wanted list.

When other members of his gang are arrested, Junior and a female companion flee NoVA tos spend a number of years on the lam. With his main character liberated from his closed, dreary environment, Boice’s language starts to loosen up a bit and his worldmaking vision comes into clearer focus. Some of the science fiction details are better integrated and less jarring. (Why does everybody drink beepollen?) Boice’s inventiveness and humor become even more apparent. In one remarkable passage Junior reflects on a personal hero, Bob Dylan.

After seeing a new documentary about him on Public Television Channel featuring scholars of history, religion, and art discussing the man’s life and work, he began walking the streets of foreign cities humming the songs of Bob Dylan: “Imagine,” “Auld Lang Syne,” “(I Can’t Get No) Satisfaction,” “Beat It,” “Amazing Grace,” “Even Flow,” “Sgt. Pepper’s Lonely Hearts Club Band,” and so on. His lifelong obsession rekindled. [ . . . ] Standing in the shadow of grand ruins jutting forth from unexpected swaths of green land–golden arches, swooshes, crosses, and other ancient Information Revolution Era religious symbols–as if the claw of the past tore through its tomb and reached for the life in heaven that its makers abandoned it for.

–Bob Dylan was ruthless, Junior told [Maria] as they wandered the markets. –He was a throat cutter. He was the meanest son of a bitch you’d ever meet. The most ambitious. He wasn’t afraid to size you up and let you know you came up short. He knew what he wanted. Supremacy.

By this time Junior is a few months away from qualifying for Visa AARP membership, and vengeful forces are in pursuit, so his days of supremacy are well behind him. To the end he is soulless yet full of yearning–much like the region from which he comes, the northern Virginia suburbs.

The Good and the Ghastly is a regionalist sci fi novel–the first of its kind, as far as I know–with the ruthless determinism of the gangster genre. Everybody is doomed to be either pummeled on the spot or hunted to the point of exhaustion. And yet Boice can’t resist endowing his dystopia with a series of sly running jokes. After the nuclear apocalypse, he informs us, men will become attracted to women with big bellies. I’m not sure why it’s amusing that the Visa FBI should exactly resemble the FBI of our time, but it is. Boice’s two greatest strengths are on full display in The Good and the Ghastly: his language and his feel for a place both immediately recognizable and deeply mysterious.