The first images hit the Internet in early June. 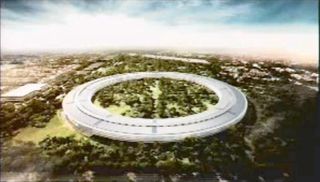 In what was surely the most famous Cupertino city council meeting in history, Steve Jobs had presented Apple’s plans for an expanded corporate campus for council approval. Jobs declared, “Architecture students will come here to see this.” However, the image dissemninated across the Internet more quickly than some of the details of the presentation, such as the name of the architect.

The Architizer blog was on the case immediately.

We assumed the radial form was most likely the work of Bohlin Cywinski Jackson, who design most of Apple’s stores. But this morning, they told us that they’re “just as curious” to find out who the architects are. Our second guess was Bjarke Ingels Group, since the renderings are similar to their renderings for recent commission National Gallery of Greenland. Yet, BIG’s Copenhagen office denied any involvement.

The architect turned out to be Norman Foster, a brand name as well known in architecture as Apple is in technology.  The selection of Foster to design the City of Apple campus made sense–maybe too much sense. Steve Rose wrote in the Guardian,

So what about the design? Foster has obviously taken a leaf out of Apple’s chief designer Jonathan Ive’s book – sorry, iPad. It looks like the circular trackpad of a giant iPod. If you run around the building very quickly, does a giant playlist light up in the sky? Mind you, by the time it’s finished in 2015, it could look out of date.

One could point out that Foster’s design owes less to the iPad than it does to some of his previous work, such as the McLaren Technology Centre in Woking, England. 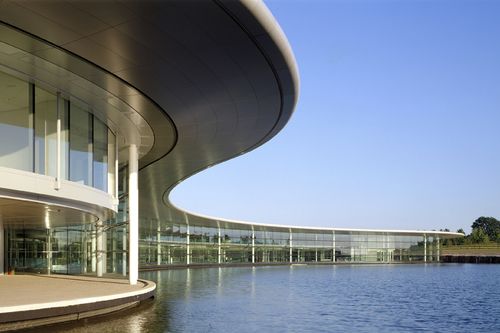 Or the Petronas University of Technology in Malaysia. 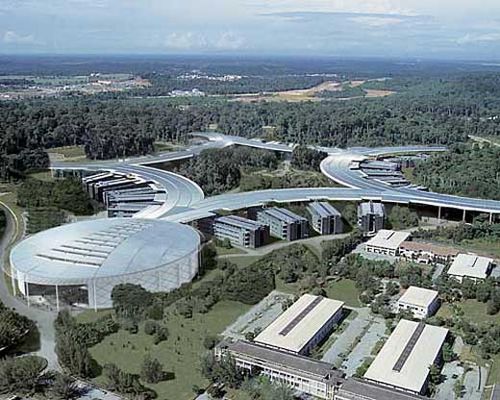 Sustainable design commentators found the City of Apple design nice enough from an aesthetic point of view, but they were very psyched by the building’s green technologies. Treehugger said Foster’s building will

reduce the amount of asphalt on the property by 90%, increase the number of trees by 60% and the amount of landscape by 350%, and all of this while reducing the actual building footprint by 30%. It’s also going to be off-grid, generating it’s own power and using the grid as a backup, but that electricity will be produced with natural gas, according to what Steve said in the presentation. Hopefully they’ll also incorporate renewables into the mix (or get biogas from a landfill or something).

So far the only dissent to the often breathless praise heaped upon the proposal comes from Aaron Betsky writing in Architect magazine. He calls Foster’s design “Modernism on Valium,” predicting the finished product will be

the kind of building Skidmore, Owings, and Merrill would have designed in their heyday: meticulously detailed, polished to within an inch of its life, modular and repetitive, and without any quirks, exceptions, or sense of human scale or presence.

Betsky regard the building as the embodiment of the central paradoxes of Apple’s product strategy. The company designs its products in splendid, uncluttered suburban isolation for a target market of hipsters deeply, if somewhat ironically, immersed in the messiness of urban life.