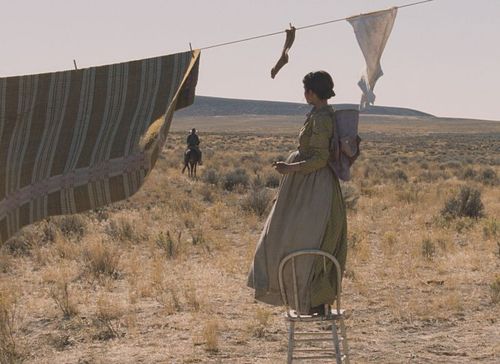 David Bordwell, the dean of American film studies, finally contributes to the discussion raised by film critic Dan Kois’ “Eating Your Cultural Vegetables.” In what’s supposed to be a confession, Kois admits there are films he wants to like more than he actually does. He calls it “aspirational viewing,” the desire to “experience culture at an ever more elevated level.” He mentions Kelly Reichardt’s Meek’s Cutoff (still above) as the sort of steamed broccoli he knows he should like, but doesn’t.

Bordwell points out that people only really make complaints like this about movies. “We have a polarized film culture,” he explains,with “fast, aggressive cinema for the mass market and slow, more austere cinema for festivals and arthouses.” The division isn’t simply a snob/populist divide, though.

So Kois may assume that “boring” films have persisted in today’s film culture because of snobbism, but there are deeper reasons. The competition among filmmakers to push an aesthetic horizon further, the narrowing of audience tastes, the search for a budget-appropriate niche that could stand in opposition to the visual spectacle of the New Hollywood–these seem to me important factors in making slow movies a ghetto for cinephiles.

Giving up slow movies means giving up the opportunity to see some films that push the boundaries of the medium. Bordwell isn’t just being Professor-Eat-Your-Peas here. Avoiding boring films means consigning oneself to a rather narrow range of filmmaking–in itself a boring prospect.

My question is this: What’s the matter with aspirational viewing? (Or reading, or listening?) Isn’t all viewing in some way aspirational? For example, a guy announces in the office that he saw Transformers. Who cares? He does. He wants to be seen as the kind of guy who likes Transformers. There’s a social currency to any film viewing. It’s the social currency we want out of watching a particular film. Individual pleasure is nice, too, but it’s not as important as some people might imagine. Even when we’re alone, we don’t watch purely for ourselves.