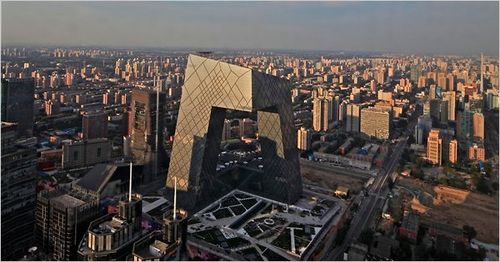 In a startling claim, Nicolai Ouroussof declares Rem Koolhaas’s CCTV tower in Beijing “may be the greatest work of architecture built in this century.” This seems like a large claim to make in a relatively short newspaper article, especially one published in 2011. What prompts this claim? The building is “an eloquent architectural statement about China’s headlong race into the future and, more generally, life in the developed world at the beginning of the 21st century.” At the same time, the CCTV tower is “one of the most beguiling and powerful works I’ve seen in a lifetime of looking at architecture.”

So is this building important for symbolic or experiential reasons? Evidently a combination of both. The CCTV tower embodies the zeitgeist and serves as the exemplar for Ouroussoff’s critical ideal.

Ouroussoff doesn’t elaborate on what makes Koolhaas’s tower more beguiling than, say, Herzog and de Meuron Beijing Olympic Stadium. However, Ouroussoff explains why the building is so emblematic of our complex and contradictory age. On the one hand, the building lacks the conventional markers of scale–markers calibrated to the human body. The building presents no fixed perspective, so it’s difficult to get a sense of its true size, “an apt metaphor for how giant media companies like CCTV have collapsed the scale of our world.” On the other hand, despite the inscrutability of Koolhaas’s design, it nevertheless strives to “make room for the impurities and imperfections that make us human.”

Looking at images of the building myself, what strikes me about Koolhaas’s design is its graphic quality. The busy crosshatching at critical junctures of the building seem surface deep, although they’re actually stress points for the infrastructure. The building’s shape is completely unlike anything else that exists in the world–a Cartesian, Modernist gesture, despite what Ouroussoff says about Koolhaas’s critique of Cartesian thought. Furthermore, in its confluence of aesthetic regimes–writing and sculpture, graphic design and architecture–suggests a stronger continuity with Modernism than Ouroussoff allows. Koolhaas’s Modernism is without angst, hysteria, or elegance. He has combined Mies van der Rohe and Kurt Schwitters into one work of art. He’s the only architect I can think of who could pull off such a synthesis and, quite possibly, point to a way beyond old Modernist binaries. That alone may make the CCTV tower the greatest work of architecture in this century.